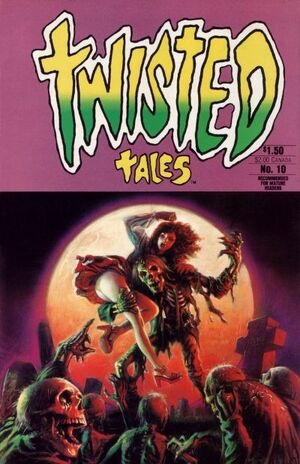 Appearing in "Egg in Your Beer"Edit

Synopsis for "Egg in Your Beer"Edit

A werewolf tall tale told by some guys in a bar.

Appearing in "One for the Money"Edit

Synopsis for "One for the Money"Edit

Scientists determine to use a time machine to ascertain whether Lizzie Borden murdered her father and stepmother. The scientist enters the house on the day of the killings and finds the stepmother dead in a room. He goes downstairs to see if he can interrupt the killing of the father but the father attacks him with an ax. He sees Lizzie asleep on the couch and jumps to the conclusion that the father was going to murder his wife and daughter in order to run off with the maid. He kills the father in a rage. The other scientists bring him back to their present time and inform him that they have learned nothing other than that the scientist is guilty of having killed the father.

Appearing in "If She Dies"Edit

Synopsis for "If She Dies"Edit