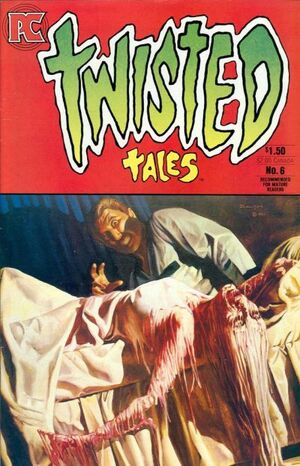 A character in a dream suffers an agonizing death as the dreamer returns to consciousness.

A werewolf leaves his apartment to walk his dog. The moon brings on the transformation and he becomes wolflike. The dog undergoes a transformation as well into a female werecreature. She walks him back to the apartment.

A production assistant finds his missing film director in a Salina, Kansas house haunted by the ghost of a beautiful woman. Every night, she reenacts the murder-suicide where she shoots first her lover then herself. After viewing the spectacle with his director the assistant tells the director that he should get it on film. The man says he thought of that, or reporting the haunting, but he fell in love with the ghost and is afraid that the spirit may simply become disturbed by the attention and vanish. He is willing to spend his days at the house merely to see her every night for those brief moments. The assistant tells him that he should get help, and leaves the house, but he returns later as he has become smitten as well.

A lonely old man adopts a black widow spider in his apartment as a pet and feeds it a steady diet of roaches. When the winter months come, he is concerned at the spider's inactivity and moves the light bulb closer to its web to provide it more warmth. He talks to the spider as it feeds and finds himself less preoccupied with death. One day, while he is out, his son visits with his pregnant wife hoping to get a handout and the wife cleans the place up. When the man sees the web is gone he becomes enraged and throws the uncomprehending couple out. He stares disconsolately at where the web used to be and days go by without him moving or eating. Finally, he notices the spider, missing one leg, on his hand. It had avoided the destruction of its web and as he moves to touch it, it bites him and begins spinning a new web between his hand and the chair's armrest. The man is happy to see his friend back and doesn't mind the poison spreading through his body. With his last breath, he utters the words "welcome home."