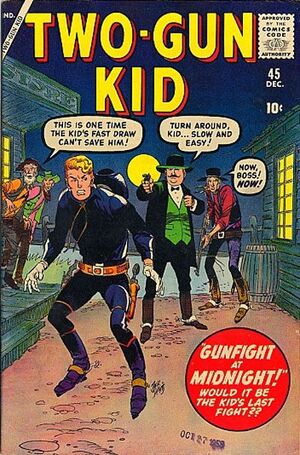 Appearing in "Gun-Fight at Midnight!"Edit

Synopsis for "Gun-Fight at Midnight!"Edit

Answering a call from Jonathan Park the banker for the town Cody's Landing, who wants to hire the Kid to make sure the upcoming election for sheriff is an honest one. Park warns Two-Gun that a gun-fighter named Hobe Smith is also trying to get elected for the position. In the local saloon, the Kid crosses paths with Hobe Smith and the two exchange harsh words, that convince the Kid that Park is telling the truth.

Later that day the Kid is walking about town when he comes across some men and asks them who they intend to vote for. When they tell him that they are going to vote for Park and get violent, the Kid defends himself until Park comes out and tells the men to stand down, telling them that they were about to draw against the Two-Gun Kid and that the Kid is under his employ. When the Kid suddenly realizes that Park has men who are being paid to make sure people vote for him, the Kid decides to have a good talk with Hobe Smith. Not liking this Jonathan pulls a gun and tries to shoot Two-Gun in the back, but the Kid manages to dodge the shot by rolling onto the ground and succeeds in shooting the gun out of Park's hand. However one of Park's men manages to draw and shoot one of the Kid. Park and his men then leave the Kid there to die in the street as a message to the others.

However the Kid is found by Hobe Smith who takes him to the local doctor for treatment. Revived, the Kid is shocked to find that he is blinded thanks to the shot creasing his brow and affected his optic nerves. The doctor theorizes that the Kid's vision should return in a few days. Realizing who was that Hobe is the right man for the sheriff's position. With too many of Park's men out to threaten people, the Kid convinces officials to hold the election at midnight that night. When Hobe tries to force the outlaws out, they stand their ground until the Two-Gun Kid challenges them. Sure enough the outlaws flee without a single bullet fired. Without his men to back him up, Jonathan Park surrenders telling the Kid that he surrenders. The Kid then reveals that Park surrendered to a blind man, and Hobe wins the election by a landslide. Later, with his vision restored, the Kid reveals that he chose the midnight election time in order to bluff Park into surrendering.

Appearing in "The Kid From Dodge City"Edit

Synopsis for "The Kid From Dodge City"Edit

However the Kid realizes that he has to do something when his imitator starts picking on an old man. The Kid feels guilty but decides to still do nothing about it, and goes to get the local sheriff to deal with the problem, but he learns that the sheriff was killed the previous week and a new one has not been elected yet. Shortly thereafter the impostor attempts to pick a fight with the real Kid, and Jess manages to out shoot his imitator. Realizing that he was up against the real Kid from Dodge City, he surrenders and the Kid learns that he has been pushing people around town knowing that the sheriff was dead and nobody knew what the real Kid from Dodge City looked like. With the outlaw locked up, the Kid then leaves town.

Appearing in "The Revenge of Roaring Bear!"Edit

Synopsis for "The Revenge of Roaring Bear!"Edit

The Two-Gun Kid is riding along Sagamaw Trail in Arizona when he was attacked by a band of Apache warriors. The Kid is forced to surrender and when he asks why he was attacked when they made a peace pact with the white men go unanswered until he is brought to the camp of the Apache chief Roaring Bear.

There Roaring Bear demands that the Kid get on his feet when being addressed. The Kid then challenges Running Bear's bravery by demanding that he gets untied. The Kid easily defeats Roaring Bear in a hand-to-hand fight then demands to know why the Apaches attacked him. He learns that the Indian Agent that has been hired to provide government assistance to his people is responsible for the murder of two of their braves. When Roaring Bear tells the Kid that he intends to go into town with his warriors and attack the white men, the Kid asks the Apache chief to provide him with time to learn the truth. Roaring Bear agrees to have the Two-Gun Kid investigate the murders on their behalf but he insists that the Kid bring his son Proud Eagle along with him to Sagamore City.

The pair are ambushed by gunmen on their way and the Kid pushes Proud Eagle out of the path of the bullet. The bullet meant for Proud Eagle's heart strikes him in the arm instead, but he passes out from his wounds. Seeing this, and believing that the Two-Gun Kid has betrayed them, the Kid is forced to flee to town. There he asks where the Indian Agent is. He finds the man, Sam Jethroe, bragging about his plans to drive the Apaches out of the area. Confronting Jethroe, the Kid is knocked out and given the fact that he knows too much about their plans, Sam has his minions lock the Kid up in the local jail for disturbing the peace. The Two-Gun Kid comes to and finds himself locked in a jail cell, but manages to sneak up on the sheriff and break himself out.

As the Apaches are approaching to attack the town, the Two-Gun Kid attacks Jethroe and forces him to confess. As it turns out, the man's name is really Bill Lindo, and he murdered the real Sam Jethreo in order to force the Apaches to go to war so he could sell guns. As the Kid tries to subdue Lindo, Roaring Bear gets the drop on him and tries to attack the Kid. The Two-Gun Kid is saved when Proud Eagle comes in and tells his father that the Kid had nothing to do with his injury. With the war stopped and Lindo in custody the Two-Gun Kid rides off before he can be thanked.

Retrieved from "https://heykidscomics.fandom.com/wiki/Two-Gun_Kid_Vol_1_45?oldid=1465103"
Community content is available under CC-BY-SA unless otherwise noted.