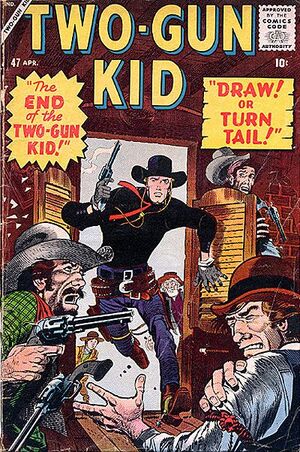 Appearing in "The Sheriff Had a Son!"Edit

Synopsis for "The Sheriff Had a Son!"Edit

In the town of Sagebrush the Two-Gun Kid is challenged and outdraws the outlaw Deuce Dillon. The sheriff who is none impressed by the gunfight in his town and warns both the Kid and Dillon that if either of them cause any trouble he will run them out of town. The sheriff goes to his young son Tom and tells him that's how you treat trouble makers in town, and that there is nothing worse than a gunfighter, Tom is not scared of the two gunslinger telling his father that he can probably outshoot both of them. Meanwhile, Deuce warns the Kid that he will get even with him later.

The next day the Two-Gun Kid walks into the local saloon and spots Deuce talking with the sheriff's son Tom. Not liking this meeting the Kid tries to go and warn the sheriff, but the lawman has no interest in listening to anything the Kid has to say, let along accusations that that his son is hanging out with Deuce Dillon. Seeing that he cannot get through to the sheriff, the Kid decides to keep a close eye on Tom to make sure nothing goes wrong.

Eventually, the Kid realizes that Tom is stalling his father for time keeping him away from his patrol long enough for Deuce Dillon to rob the local bank. When the Kid tries to join the sheriff, he refuses the Kid's help. With the sheriff gone and knowing that Deuce could easily gun him down, Two-Gun orders Tom to tell him where Deuce went, when the boy refuses and tries to draw his gun the Kid easily knocks the boy over. Consumed with guilt over possibly sending his father to death, the reluctant Tom takes Two-Gun to Deuce.

When they arrive at Deuce's hideout they find that he is shooting it out with Tom's father. When Tom tries to stop Deuce from killing his father the boy is shot in the arm instead. This allows the sheriff to shoot Deuce down, in the aftermath the Kid tries to explain Deuce's plot but the sheriff is unwilling to believe that his son helped Deuce in anyway. Unable to convince the sheriff otherwise, the Kid decides arguing is useless and rides off convinced that at least Tom learned from the experience.

Appearing in "The End of the Two-Gun Kid!"Edit

Synopsis for "The End of the Two-Gun Kid!"Edit

The Two-Gun Kid rides into Rock City and goes into the local saloon. He arrives just as local bully Trigger Storm has just finished roughing up a local and demands to know if anyone disputes his claim to run the entire town. The Kid breaks up the fight and when Trigger tries to draw on the Kid, Two-Gun easily shoots the gun out of Trigger's hand. Tigger is shocked to learn that he was out drawn by the Two-Gun Kid and quickly relents.

When the Kid leaves the saloon he spots a woman in danger when her horse beings to run wild, dragging her along on her shay. The Kid leaps to her rescue and stops the horse and introduces himself to the young woman, whose name is Sally Nesbitt. The Kid is instantly smitten by her and when he introduces himself she tells him that she doesn't like gun-fighters since her brother was killed in a gun fight. Not wishing to upset the girl, the Kid takes off his gun belt and offers to take her home. Along the way, Sally begins to warm up to the Kid and begins to make him consider that eventually someone will be a faster gun than him, and that she could never respect a man who solves his problems with a gun.

Over the next few days a romance blossoms between the two, and when Sally asks if he has a woman back home, but the Kid tells her that he did but figures it's over now.[1] The couple are interrupted by Trigger Storm, who has come to rematch the Kid. When the Kid refuses to draw, Trigger tries to pick a fight, but Two-Gun is told not to fight back by Sally and the Kid stands down, although he doesn't feel that it's right to do so.

Seeing his only opposition is no longer willing to fight, Trigger demands to the locals elect him mayor or he will shoot up the town. The Kid decides he can no longer stand down and goes after Trigger and hears Sally in the next room. Overhearing Trigger thanking Sally for tricking the Two-Gun Kid into falling in love with her in order for Trigger to take over the town, the Kid storms in and beats Trigger into submission with his bare hands. When Sally tries to explain herself, the Kid tells her that after he gets the locals to run Trigger out of town he is going to recover his guns and leave as well. After as the Kid rides out, Sally breaks down into tears, finally admitting to herself that she actually did come to love the Two-Gun Kid.

Appearing in "With Gun in Hand!"Edit

Synopsis for "With Gun in Hand!"Edit

Appearing in "Draw! Or Turn Tail!"Edit

Synopsis for "Draw! Or Turn Tail!"Edit

The Two-Gun Kid is riding along the trial, when he crosses path with a man walking. Stopping to ask him he doesn't have a horse, the man explains that he sold it for a coach ticket to go back east and that he is walking to catch the stage. The Kid finds it strange that the man would not wait for the coach in town. The man introduces himself as John Fenton, he was the school teacher in town until he was made a laughing stock by Flash Carter. Fenton explains that Carter convinced all the children to stop attending school, that an education was a waste of time, and without students to teach he was out of a job.

The Kid, having heard of Flash Carter, takes the teacher back to town, convincing him to give him 24 hours to convince the children to get back to school. In town, the Two-Gun Kid goes into the local saloon and when Flash Carter tries to pick a fight with him. The Kid easily trounces Cater, out shooting and out fighting him and tells him to get out of town. Going outside, the Kid finds the local children -- as he expected -- and when they ask him where he learned how to fight and shoot, he tells them that he learned it from his friend John Fenton, and tells the kids that they can learn a lot from him, convincing them to return to their schooling. When Fenton thanks the Kid for his help, the Kid tells the school teacher that it is him who should be thanked for providing a future for the children and making the west a better place.

Retrieved from "https://heykidscomics.fandom.com/wiki/Two-Gun_Kid_Vol_1_47?oldid=1465105"
Community content is available under CC-BY-SA unless otherwise noted.