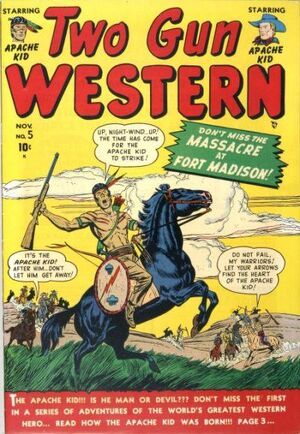 Appearing in "Massacre at Fort Madison"Edit

Synopsis for "Massacre at Fort Madison"Edit

An Apache war party converges on a wagon train of white settlers and begins slaughtering them. Among the travellers are Alan Krandal, Bill Gregory and Bill's sister Mary. Alan's mother protects the children while they escape and she is killed by the Apaches. Getting clear of the carnage, Alan realizes that he has a twisted ankle and tells Bill and Mary to flee while he keeps the Apaches at bay. With no choice, the Gregory's leave their friend behind. Soon Red Hawk, leader of the Apaches and his men come across young Alan. Alan refuses to tell them anything even with fear of death. This impresses Red Hawk, who orders his men to stand down and decides that he will raise the boy as an Apache in the hopes of using him as a spy against the white men who invade his land. He decides this despite the protests of Brown Toad and Fannin, a white arms dealer that has been supplying the Apaches with guns.

Staining the boys skin to look like a Native American, Red Hawk has the boy learn the ways of the Apache while at the same time having Fannin teach him how to shoot guns. The boy is dubbed Apache Kid, but despite the training and tales of the cruelties of the white man, the former Alan Krandal refuses to believe or accept the Apache people. It is not until many years later when out on a hunt with Red Hawk does Apache Kid change his way of thinking when they are ambushed by a band of white men. Forced to flee they return to their camp and are horrified to find that it has been attacked and many of their people slaughtered. Apache Kid then decides that both Apache and white men are capable of great evil.

It is suggested that Apache Kid is sent to spy on Fort Madison to prevent being trapped by the military. Apache Kid accepts the mission on the condition that he finds a way for them to avoid capture instead of ambushing the military to avoid necessary bloodshed. Red Hawk agrees to these conditions and Apache Kid adopts another identity of roving cowboy Aloysius Kare and leaves for Fort Madison, Brown Toad and Fannin plot to insure Apache Kid's mission is a failure for their own reasons: Brown Toad seeks to take Red Hawks place as leader of the Apaches, a position denied to him thanks to Apache Kid and Fannin because he stands to lose business if there is no war.

Fannin races ahead to Ford Madison and tips off the military. When Aloysius Kare arrives at the fort he is arrested on the spot and brought before Captain Bill Gregory. During a frisk of Aloysius' body, Captain Gregory finds a small Bible tied around Kare's neck and remembers it as the same one his old friend Alan Krandal wore and realizes that they are the same man. Despite this reunion, Gregory has no choice but to lock up Kare in a cell and informs him that they intend to battle Red Hawk's forces at noon the next day. As Kare is locked in his cell, Fannin gets a man named Johnny Fletch to assassinate the Apache Kid later that day. However, a chance visit by Mary Gregory gives Kare the ability to break out of his cell and recover his guns. Fleeing the fort he guns down Johnny Fletch. Riding out of the fort, Kare changes back into the Apache Kid and then starts a brush fire to keep the military at bay long enough for the Apache tribe to relocate. Caught in the flames are Brown Toad and Fannin who and their group of dissidents who are burned alive.

Watching the military retreat with Red Hawk, Apache Kid tells his adopted father that he cannot go with the Apache people as he must now work to maintain peace between the white settlers and the Apache people.

Thus the legend of the Apache Kid is born.

Appearing in "He Was Branded Yellow!"Edit

Synopsis for "He Was Branded Yellow!"Edit

Retrieved from "https://heykidscomics.fandom.com/wiki/Two-Gun_Western_Vol_1_5?oldid=1465158"
Community content is available under CC-BY-SA unless otherwise noted.