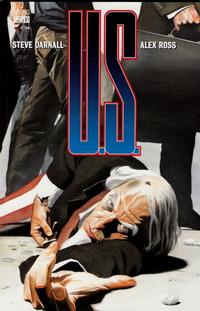 I regret I have but one life to give to my country. I regret I don't know why they took it.

Clad in star-spangled rags, a man named Sam wanders the streets of an anonymous American City, struggling to remember his true identity. But he's plagued by inner voices that carry him on a time-traveling journey to the dark heart of America... and hint at his own violent past. Is he Uncle Sam -- or one of U.S.?
— Back cover blurb

Retrieved from "https://heykidscomics.fandom.com/wiki/U.S._Vol_1_1?oldid=1474631"
Community content is available under CC-BY-SA unless otherwise noted.