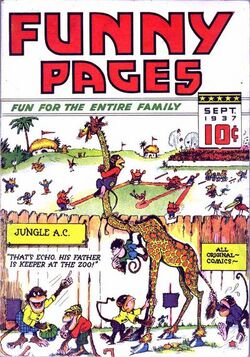 Ultem Publications was named for owners I. W. Ullman and Frank Z. Temerson. Starting in 1934 they published magazines with titles like "Silk Stocking Stories" and "High Heel Magazine". In 1937 they bought out Harry "A" Chesler's company Chesler Publications, Inc. and William Cook and John Mahon's Comics Magazine Company, Inc. Ultem shrunk Chesler's oversize comics down to the standard size, but kept Chesler on as editor and packager for both his former titles and the two former Comics Magazine titles that Ultem relaunched. All four now featured Chesler's trade dress, and Ultem's editorial address for its comics remained the same as Chesler's rather than moving to Ullman and Temerson's offices.

Ultem published comics for only five months after which all four of its titles are sold to Centaur Publications, Inc. A few months after that, Ultem reorganizes as Lex Publications which does not produce comics. Temerson would go on to start a number of comic book publishing companies, one of which (Brookwood) was edited by Maurice Rosenfield, son of J. A. Rosenfield, who was Ullman's brother-in-law.

Ultem has historically often been lumped in with Centaur (along with the Comics Magazine Company and early Chesler), but the companies have distinct editorial personalities, especially once Centaur starts building up its staff.

Retrieved from "https://heykidscomics.fandom.com/wiki/Ultem_Publications?oldid=1640520"
Community content is available under CC-BY-SA unless otherwise noted.