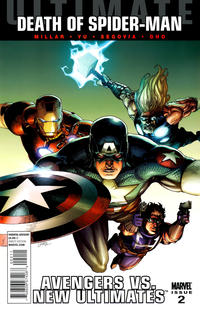 You stupid, little arse... Why couldn't you just mind your own bloody business?

Fury manages to recruit the Punisher (promising him the keys to every cell in the prison in which he is currently incarcerated) and Blade (promising to deliver to him the man who killed his mother, Deacon Frost). Hawkeye also gets recruited for Fury's mission.

Posing as civilians, the group observes the sale of Maximus, a still-gestating Super-Soldier prototype presumably similar to the Mimic. The team strikes and attempts to intercept the case containing Maximus, however they are attacked by the man responsible for the sale, Tyrone Cash. War Machine attempts to neutralize Cash, with little success, until Blade intervenes and manages to hypnotize him, reducing him to his withered form. Cash then confesses to Fury that he is working for Carol Danvers, and that she has been selling secrets for years.

Retrieved from "https://heykidscomics.fandom.com/wiki/Ultimate_Avengers_vs._New_Ultimates_Vol_1_2?oldid=1465194"
Community content is available under CC-BY-SA unless otherwise noted.