View source
Part of the 'Death of Spider-Man' event 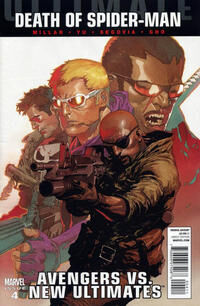 A squad of S.H.I.E.L.D. agents arrive at the bridge and, during the momentary confusion caused by Spider-Man's appearance, shoot and attempted to apprehend Fury. Filled with remorse, Frank begs the agents to "punish him" for shooting an innocent kid, at which he is then knocked out by one of the agents. Captain America promises Peter that his wound is not fatal, and commends him for taking a bullet for him without a second thought, stating that when he grows up Peter will be the best out of all of them. War Machine then arrives and blows up the bridge, causing everyone but Spider-Man, who uses his ability to stick to surfaces, to fall into the water below. Thor then arrives and attempts to rescue them, damaging War Machine in the process. Blade manages to take down Black Widow, only to then be severely wounded himself by Iron Man, who was unaware that Blade was not actually super-powered. Carol Danvers calls for backup when she is hit by a police cruiser.

While Nick Fury is in custody and Carol Danvers is taken to a S.H.I.E.L.D. hospital, the leadership of S.H.I.E.L.D. is given to Gregory Stark by the President of the United States. Gregory then takes Fury into the Helicarrier U.S.S. Jimmy Carter where he reveals to him that he was the one who pitted the Ultimates against the The Avengers. He in fact was using the smuggled Super-Soldiers to supply the rebels of rogue states to help the Pro-Democracy Forces and fueling his ambitious agenda. He then has his men shoot Fury and leave him for dead.

It’s super hero versus super hero in this epic battle that pits former allies against each other. When heroes power up there’s bound to be some serious damage and what happens here has lifelong consequences! Get geared up as the Ultimate U is on a collision course and will never be the same! Superstar team-up of Mark Millar and Leinil Yu tell an explosive tale on their final Ultimate run!