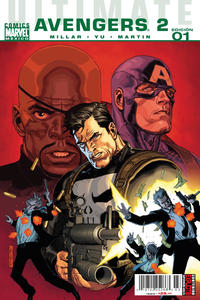 Some people wonder how I sleep at night. I tell them I just close my eyes.

Frank Castle, a.k.a The Punisher, is out taking care of the scum that walk the streets. His new goal is to eliminate mob boss Joseph Petrenko, a.k.a. The Red Hammer. The Red Hammer is having a meeting with his fellow mob bosses because he feels that New York's mob bosses are trying to muscle him out of town. The Punisher kidnaps, interrogates, and then kills for answeres to the whereabouts of the meeting. Frank disguises himself as a limosine driver, and when the Red Hammer is about to enter his car, Frank pulls out a gun and prepares to kill him. Unexpectedly, The red Hammer blocks away Frank's arm, punches his head into the car window, and then kicks him into the car. It is revealed that this was not in fact The Red Hammer, but actually Steve Rogers, a.k.a Captain America, in disguise as the Red Hammer, in a plot to take the Punisher down. When Frank wakes up, he's in a S.H.I.E.L.D. hospital, being 'greeted' by Nick Fury and Monica Chang, a.k.a The Black Widow. Fury and Chang ask Frank what they could do with a useful guy like Frank is in order to keep him off of Death Row. They talk about how the Avengers are a black OPS team, and how heroes like Captain America would frown upon teams such as this. Chang comments that the team is looking for a Captain America of their own. Fury, Chang and Castle stare at each other, knowing what each of them are thinking. Three hours later, Frank is now wearing a specialized suit that will increase his skills tenfold. Chang asks what the update is on the Hulk, and a S.H.I.E.L.D. agent tells her that War Machine is scheduled for a meeting in the morning. Frank comments that must be insane to bring in the Hulk in such a mission. Nick Fury responds by saying that this isn't Bruce Banner, but Bruce Banner's mentor. This Hulk is the first Hulk. To Be Continued.

Retrieved from "https://heykidscomics.fandom.com/wiki/Ultimate_Comics_Avengers_2_Vol_1_1?oldid=1465203"
Community content is available under CC-BY-SA unless otherwise noted.