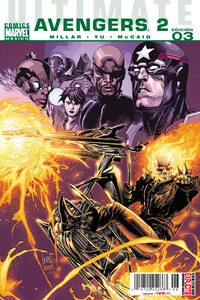 Word above is the Mutie dies. This is an execution order.

Nick Fury explains to his Avengers team that they are taking down the entitiy known as Ghost Rider. The details of his sadistic murder of several past members of a motorcycle gang (who are all now apparently successful businessmen) are reviewed. The Punisher objects saying that the people the Ghost Rider had killed probably deserved death anyway. The Punisher refuses to work on the misssion. However, the Black Widow activates the nerual controls SHIELD has implanted in Frank Castle's skull. Castle holds out until his faces bleeds. internally, nut eventually relents. Nick Fury tells the Punisher that the Black Widow has a sinister side. He tells the team he knows because he used to be married to her. Tyrone Cash notes that even though he has been forced to join the Avengers, the team is entertaining.

The team travels and investigates the petrified remains of Nelson Ford in San Francisco. The team then travels to Chicago to guard a citizen they believe will be the next target. The team is correct as the Ghost Rider soon appears on a blazing motorcycle. To Be Continued

Retrieved from "https://heykidscomics.fandom.com/wiki/Ultimate_Comics_Avengers_2_Vol_1_3?oldid=1465205"
Community content is available under CC-BY-SA unless otherwise noted.