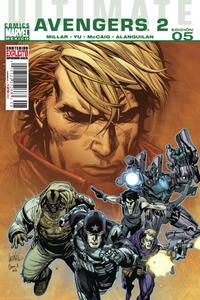 You murdered my girlfriend. Choked the life out of her. Made me watch and then slit my throat...This has been coming for twenty years, Blackthorne...You haven't got a prayer.

The Avengers and S.H.I.E.L.D. guard the front lawn of the White House. Inside the Oval Office, Robert Blackthorne is with Satan which the former had summon the entity for his help as he knows that the Avengers will be beaten by the Ghost Rider and refuse to lose everything to Blaze. Satan notes to Blackthorne that he is risking his very soul to save his, which Blackthorne accepts this as his life is already damned even if it means defeating the Ghost Rider. Satan then agrees to the Vice President's request and begins a ritual.

Outside, Hawkeye talks with the Punisher about Ghost Rider and is skeptical of what they are facing is a demon from hell. Hawkeye also notice that the Ghost Rider had passed a message to Castle before that made him believe what he is, which Castle only answer that "something that warmed [his] heart." Castle then talks to Hawkeye about how he recall someone been the first to be forcefully recruited into the Avengers which Castle believes to be Hawkeye referring to himself. Which Hawkeye answers that it is and wasn't a good man before being trained into a decent man.

Back inside the Oval Office, Satan felt Blaze's presence outside as conducts the ritual. Blackthorne questions his master as to why he gave Blaze the "opportunity" to carry out his vengeance which Satan answered that Blaze sold his soul to him, and that bringing him back allows him to get Blackthorn and his associates' souls. Satan had planned this to happen ever since meeting Blackthorn.

Retrieved from "https://heykidscomics.fandom.com/wiki/Ultimate_Comics_Avengers_2_Vol_1_5?oldid=1465207"
Community content is available under CC-BY-SA unless otherwise noted.