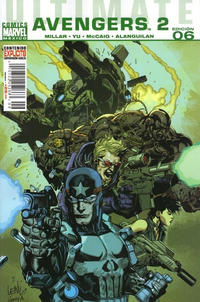 Ghost Rider has the winning advantage over his nemesis Bobby Blackthorne, known as Vengeance, but is shot off him by S.H.I.E.L.D. soldiers led by The Punisher and Hawkeye. Blackthorne "thanks" them in return by blasting them away. Just as Blackthorne towers over Ghost Rider, Tyrone Cash grabs him as he hijacks his motorcycle and crash themselves into a gas station, causing a huge explosion. Blackthorne emerges unharmed and berates a weaken Tyrone for attempting that stint to kill him. He is then chain rope by Ghost Rider and take him and himself to a nearby church to "make [his] peace with God." Blackthorne frantically criticize for what he is doing as their presence will weaken their damned themselves inside holy sanctuary. Ghost Rider doesn't care as he pummels him as they both transform back into their human selves. Blackthorne reaches for a candlestick and bash Johnny Blaze off him. As he prepares to strike down Johnny, Blackthorne is shot in the shoulder by The Punisher. Blackthorne criticize Castle for what he did, but only to be shot dead in the head.

Johnny Blaze gets up and his steadfast held at gunpoint by Castle, who states to him that he is still to be kill off by his superiors. However, Johnny tells him that he wouldn't shoot him as his actions were justifiable to avenge Roxanne Simpson's death and that he isn't too dissimilar from Castle. Johnny leaves.

Castle left the church and finds Hawkeye, telling him that he let the Ghost Rider go and his reasons for doing so. Hawkeye is shock to hear this, but Castle lectures him that his actions are the same as the Ghost Rider and that both of them never ever lay their hands on innocents. S.H.I.E.L.D. helicopters appears, as Castle demands Hawkeye to know where the inhibitor implant that S.H.I.E.L.D. put in him so he can remove it and be free. Hawkeye punches Castle out as a group of S.H.I.E.L.D. soldiers arrive on the scene.

At Waukegan, Illinois; Johnny happily watches Roxanne Simpson and her new family play in a park as he sits with Mephisto. The demon was honest to keep his word with Johnny in bringing Roxanne back and her new life. A fact she doesn't remember of her murder. Though Mephisto points out to Johnny that he must continue sending souls in order to keep Roxanne alive as part of the deal. Which Johnny consents as it is worth being the Ghost Rider.

Meanwhile, twenty miles away from New York City, Hawkeye and Nick Fury observes a scene of the wreckage of a armor convoy that was escorting the Punisher, who had escaped twenty minutes ago. Fury acknowledge the fact to Hawkeye that S.H.I.E.L.D. couldn't track the Punisher, as his implant, in the form of a tooth, was knock out when Hawkeye slugged Castle. Fury then knows that Hawkeye helped the Punisher escape and rue him that if he ever rebel him again.

As for the Punisher himself. He had left America for Russia, where he is able again track down the Russian criminal, the Red Hammer, that Castle couldn't since his capture and force indoctrination to the Avengers.

Retrieved from "https://heykidscomics.fandom.com/wiki/Ultimate_Comics_Avengers_2_Vol_1_6?oldid=1465208"
Community content is available under CC-BY-SA unless otherwise noted.