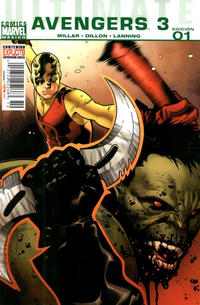 Appearing in "Blade Versus the Avengers (Part I)"Edit

Synopsis for "Blade Versus the Avengers (Part I)"Edit

Blade is check to a hotel room with three women, telling them about his occupation as a vampire hunter. He is then met by a gang of vampires who came to offer a "truce" with Blade from their new leader named Anthony. However, Blade steadfastly reject their offer. The leader of the gang Darius retort back that Anthony has been growing in power and uniting the rivaling vampire clans in the last few months, but Blade nonchalantly is unimpressed. He then kills Darius with a shotgun blast to the chest and proceeds to kill the vampires with his katanna. He is then taken briefly by surprise from the women who are also vampires, having been ordered by Anthony to make Blade weak for the fight. Fortunately, Blade still manages to fight back and kills them. Noticing one of the sole surviving vampires escaping, Blade chases him and finished him off. His actions is secretly observe by a man in an Iron Man suit.

Meanwhile, a boy named Ray Connor has suffered the same accident that Matthew Murdock had experienced and received his powers. He is approach by Stick, the man who had trained Daredevil, in his room in St. Mary's Hospital. Stick tells Ray of his development from the accident in which he is gaining powers similar to Murdock and willingly to train him in how to control it. With permission from Ray's mother, Stick trains Ray to replace Matt Murdock as Daredevil. It is learned from Stick that Ray is being trained to fight in a coming battle against vampires led by Anthony and as well about the supernatural and the occult. It is also learned that Anthony is planning to take over the world by infiltrating the superhero community. When Ray pressed Stick as to why he is chosen to replace his predecessor, Stick only reply that he "saw it in a dream." While patrolling the city as Daredevil, Ray comes to Stick and finds him being bitten by a vampirized Hulk from the Avengers. Ray is then surrounded by vampires and is overwhelm and bitten.

Somewhere at a secret S.H.I.E.L.D. base, Nick Fury consults with the other members of the Avengers (Hawkeye and Black Widow) of the news that superheroes are being taken down. Among them is the Hulk clone. The group cannot have any help from the Ultimates due to being preoccupied at a G-20 summit. As Hawkeye ask of what they will do, Captain America enters the scene and answers that they need to put together a team.

Retrieved from "https://heykidscomics.fandom.com/wiki/Ultimate_Comics_Avengers_3_Vol_1_1?oldid=1565315"
Community content is available under CC-BY-SA unless otherwise noted.