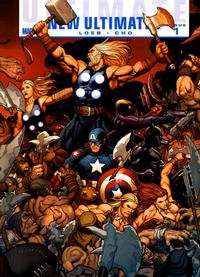 How we all have to find out within ourselves what it takes to survive. Even if it's only for another day. Mine apparently has to do with Martinis, money. Many, many women. And once again, The Ultimates. I don't know if it's what I'd call a good life, but it is my life.

Eight months after Ultimatum, the world is still recovering. On the Triskelion, Clint Barton is depressed due to the fact that it would have been his son's eighth birthday. Tony insists on drinking on it. Suddenly, the Defenders, seemingly powered up, and evil, arrive. After a brief fight, Captain America, Zarda, and Valkyrie arrive to help the Ultimates. Valkyrie throws Mjolnir at one of the Defenders; Son of Satan, but that's what he wanted. The Defenders then teleport away.

In Valhalla, Thor has defeated Hela's army. He demands that she allow him to return to Earth, to Valkyrie. Hela tells Thor she will let him go back to Earth, in exchange for a son.

At the Triskelion, Tony Stark and Carol Danvers are arguing about the Defenders. Danvers says that Son Of Satan is working for them, and that she needs to keep an eye on all freaks. Tony gets angry, because she just called the men and women who saved the planet freaks. Tony flips her off. Cap and Zarda are watching. Cap tells Zarda that they hate each other. Zarda tells Cap that she sees them as lovers. Zarda tells Cap that she can show him what she sees. Cap declines, and walks away. At Central Park, New Ultimates members Shanna, Ka-Zar, and Black Panther are taking a walk with their tigers. Suddenly, it gets cold, and with the power of Mjolnir, Loki comes back to Earth with a swarm of Trolls and monsters. At the Triskelion, it is revealed that Zarda was right, and that Tony and Carol are romantically involved.

Retrieved from "https://heykidscomics.fandom.com/wiki/Ultimate_Comics_New_Ultimates_Vol_1_1?oldid=1465401"
Community content is available under CC-BY-SA unless otherwise noted.