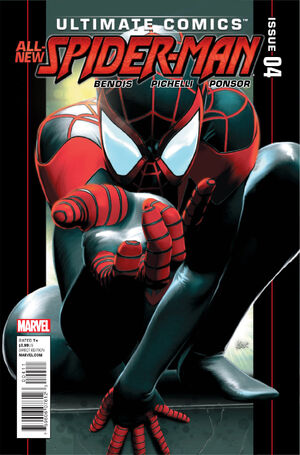 Hey Hulk, remember me?? Spider-man?? We had a moment. We're pals. (Please don't smash me).

Johnny Storm is now living with the Parkers, and while he is settling in his new home, Mary Jane Watson is almost kidnapped while with her boss, who fled. Mary Jane was saved by the mysterious red cloaked vigilante, who reveals to be the Shroud. Mary Jane then goes over and tells Peter what happened, and that she should never have broken up with Peter because she has no one to protect her anymore. While everyone is discussing this awkward moment, Mary Jane's news reporter friend rushes to her to come with her to get to the Queensborough bridge, where the Hulk is destroying everything. Peter gets dressed up, and rushes to the bridge as Spider-Man, where he finds the Hulk causing destruction. Hulk quickly attacks Spider-Man. Spider-Man notices three things are wrong: First, An explosion erupted, but the Hulk was just standing there, doing nothing. Next, Spider-man webbed the Hulk, but the webs never hit the Hulk, and third, rubble and debris fell threw the Hulk. Explosions erupt all around Spider-Man, as he is injured severely and is unconscious, bleeding from his mouth. Mysterio enters, saying: "Got ya". To be continued.

Retrieved from "https://heykidscomics.fandom.com/wiki/Ultimate_Comics_Spider-Man_Vol_1_4?oldid=1465409"
Community content is available under CC-BY-SA unless otherwise noted.