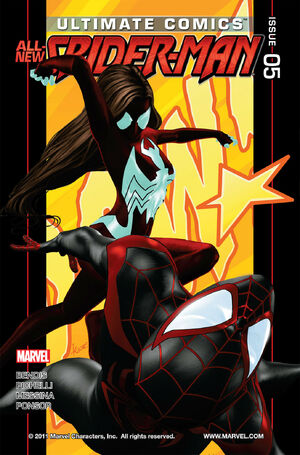 Kitty Pryde's mother is coming home from shopping. She enters the house, and it is very cold. She hears some noises coming from another room. She takes a knife for protection, and enters the room. She finds Bobby Drake, a.k.a Ice Man, sitting on the floor, explaining that Kitty let him sleep and eat there for the time being, as he has no home.

Mysterio is standing over Spider-Man's unconscious body. Spidey is fully awake, but is too dazed to get up. Mysterio prepares to pull off Spider-Man's mask, when Shroud enters and kicks Mysterio away. Mysterio fires an energy blast at Shroud, but it doesn't do anything, so he grabs and throws him into the river. Mysterio goes back to where Spider-Man was lying, but he finds nothing but a puddle of blood. He looks up and Spider-Man kicks him in the head. As Spider-Man bashes Mysterio, telling him to surrender, Mysterio blasts him away. Spider-Man gets up from the floor, and finds Mysterio walking towards him. Spider-Man tries to web him, but it doesn't work. Mysterio sends a big blast which throws Spider-Man into a pole. Mysterio prepares to blast Spider-Man again, when Shroud comes back, kicking into Mysterio's machinery on the back of him. A bald man appears as the identity of Mysterio. Mysterio gets very angry and creates a huge explosion which almost covers the entire Queensborough bridge. Spider-Man gets up. Mysterio is still there, and Spider-Man jumps for him. Mysterio teleports away.

Spider-Man goes over to Shroud who is still getting up. He asks Shroud some questions, but Shroud is cautious and answers in only a few words. Shroud points to a device on the ground, and leaves. Spider-man finds a small tech from Mysterio's suit.

Kitty and Bobby are sitting on a couch, with Kitty's mother complaining that she can't take care of two kids. Kitty proposes something else.

At a Police station, Spider-Man enters and tells Captain Frank Quaid about the device. Quaid tells Spider-Man that everyone is looking for Mysterio, and they will help look for him, now more than ever.

That night, Peter is walking back home. Gwen comes outside and tells Peter to be calm for a new surprise. Gwen tells Peter that someone else will be moving in. Peter goes in the house to see Kitty and Bobby in the living room. Aunt May and Peter go into another room, where Aunt May reveals that Bobby will be moving in with them too. Peter reluctantly agrees.

Mysterio is rebuilding his suit, screaming out his rage towards Spider-Man, when he sees blood on the damaged suit. He remembers that the blood wasn't his, so it had to be Spider-Man's...

Retrieved from "https://heykidscomics.fandom.com/wiki/Ultimate_Comics_Spider-Man_Vol_1_5?oldid=1465410"
Community content is available under CC-BY-SA unless otherwise noted.