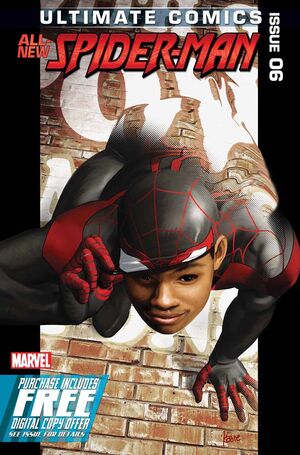 Any chance I'm dreaming all of this? Maybe when I got bit by the spider that gave me my powers I went into a coma and this is all just some big hallucination. How great would that be?

Peter is now living with his aunt, Gwen Stacy, Johnny Storm, and Bobby Drake all in one house. A superhero house. Johnny, sometimes known as the Human Torch, and Bobby, also sometimes known as Ice Man, are trying to get into Midtown High. Johnny dyes his hair black and Bobby shaves his hair off to keep a secret identity. But they are not registered in the school just yet. Aunt May has to go to the principal to get them into the school. The same principal that called the police under the suspicions that Peter was Spider-Man. That was then. This is now; Spider-Man is known as a hero. He used to be known as a vigilante and a thug before Jonah Jameson wrote that paper about him telling how great Spider-Man was. The principal is more positive now and is happy to bring in these new students.

Mary Jane is shocked to see a pack of superheroes standing together in school. Peter explains that they are his 'cousins' and are new there. As Peter continues, his spider-senses go off, with danger coming from the entrance. Peter walks slowly to the door. Suddenly, there is an explosion. Out of the fire and the wreckage comes a huge green machine with three eyes and weapons. Everyone runs out of the school, except for Peter, who dodges all the machine's attacks, all the attacks that seem to be aiming at him. As Spider-Man, Peter rescues the principal, who was sitting under his desk. In comes the Shroud, who dives for the machine. Spider-Man turns to help the Shroud out, but sees the machine shut down, with Shroud standing over it. The Human Torch enters to help, but the fight is over. Spider-Man and the Human Torch look to where the Shroud was, now gone. The Human Torch remarks that maybe they should invite Shroud to move in with them also.

As the two heroes swing and fly into applause, the Shroud literally comes out of the floor from the side of the building. The Shroud takes off it's mask, revealing the identity of the Shroud: Kitty Pryde.

Later that night, Mysterio reveals online that it was he who sent the "Spider-Slayer", and that he caught the entire fight on video. Mysterio sees that the police and S.W.A.T are coming his way. Mysterio is forced to blow up his headquarters. Police captain Frank Quaid states that he was "so close"...

Retrieved from "https://heykidscomics.fandom.com/wiki/Ultimate_Comics_Spider-Man_Vol_1_6?oldid=1465411"
Community content is available under CC-BY-SA unless otherwise noted.