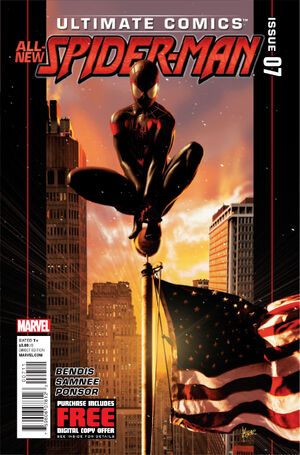 They picked you, Rick Jones. The Watchers came to Earth and chose someone to lead us into the future... It's you. You're the Chosen One.

Rick Jones recently got new powers. May Parker asks Peter (Spider-Man), Johnny (Human Torch), and Bobby (Ice Man) to go and help Rick. When the three get to Rick's back yard, they see Rick powered up. Rick is frightened, and teleports away. Eventually, Rick teleports back, when Johnny remembers the Watchers which gave powers to someone on Earth. That 'someone' is Rick.

Retrieved from "https://heykidscomics.fandom.com/wiki/Ultimate_Comics_Spider-Man_Vol_1_7?oldid=1465412"
Community content is available under CC-BY-SA unless otherwise noted.