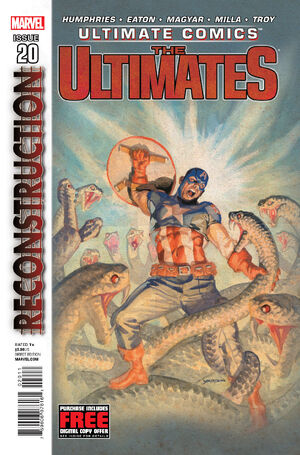 Hang on-- are we really talking about this? We're talking about assassinating Nick Fury. The original badass. The reason we're all here. Apologies to the nerds in Intel, Monica, but this is *@#!%&^%.

Appearing in "Reconstruction, Part 2 of 6"Edit

• As America rebuilds, President Cap must find out who is behind the latest wave of attacks on the country!

Retrieved from "https://heykidscomics.fandom.com/wiki/Ultimate_Comics_Ultimates_Vol_1_20?oldid=1528736"
Community content is available under CC-BY-SA unless otherwise noted.