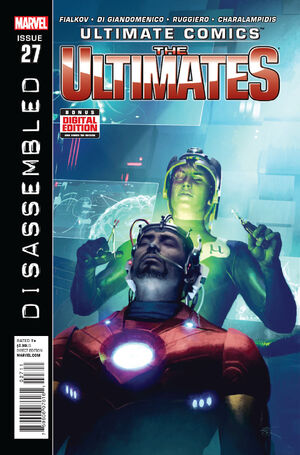 Joke. Fine. Underestimate us. We've fought invasions and monsters, vampires and clones. And we've always won. We will destroy you, Reed. That's the thing about us. You're right. We are stupid, Reed. We're too stupid to know we're beaten. So we never give ughgggh--

• The Hunt for the final stone puts the life of an Ultimate at risk!

• As Reed gets his first glimpse of Ultimate Kang’s true motivations.

• For the world to live, an Ultimate MUST die. And he’s really not happy about that.

Retrieved from "https://heykidscomics.fandom.com/wiki/Ultimate_Comics_Ultimates_Vol_1_27?oldid=1512109"
Community content is available under CC-BY-SA unless otherwise noted.