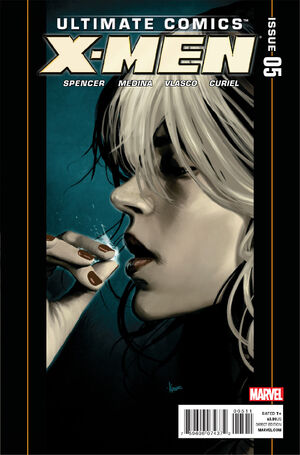 You appear to be staggeringly incompetent.

In a flashback to seventeen years ago, young William Stryker is ridiculed by his father for being weak. His father tells him that if he follows his orders he will make him strong.

In Times Square, now, Stryker's men bring before him a young mutant who is covered in thick scales. He speaks of how mutant camps are a waste of resources and that the mutants should be, instead, brought to him. He then touches the young boy on his forehead and his scales immediately fall to the ground. The boy seems to no longer be a mutant. Rather than showing gratitude, the boy is angry with Stryker for what he has done to him. Stryker uses his blade to kill the boy.

In the White House, Valerie Cooper is conversing with Quicksilver and the President of the United States about Cerebra. Pietro convinces the President that using Cerebra to guide the Nimrod Sentinels will make the public view him as a true hero in these hard times. The President excuses Valerie. She asks her assistant, Philip, to retrieve for her as much info as she can on both Pietro and Stryker, the latter being more important.

Stryker is about to demonstrate his mercy on another young mutant when Jimmy Hudson, Iceman, Human Torch and Rogue appear and warn him to let her go. Stryker reveals that Rogue is his ally and she immediately subdues both Johnny and Bobby using Bobby's absorbed powers. Stryker, two weeks prior, promised Rogue to free her of her mutant abilities if she brought the others to him. Stryker readies to kill Jimmy but Rogue demands that he fulfill his side of their deal before he lays a hand on them. He is about to heal her when the Shroud arrives and punches Stryker, knocking him to the ground.

At the White House, Pietro uses Cerebra to locate every mutant in the entire world. The President launches the Nimrod Sentinels and Pietro uploads the mutant's locations to them. Valerie discovers that Stryker is really a mutant and that when he was a boy his father kept him doped up and convinced him he was just ill so that he wouldn't find out. She warns Pietro and the President and states that Stryker's gift is the ability to control machines. As the Sentinels near it becomes apparent that they are now under Stryker's control.

Our heroes must assemble to put an end to Stryker's evil plan!

Is there a traitor amidst the new X-Men?

Retrieved from "https://heykidscomics.fandom.com/wiki/Ultimate_Comics_X-Men_Vol_1_5?oldid=1465539"
Community content is available under CC-BY-SA unless otherwise noted.