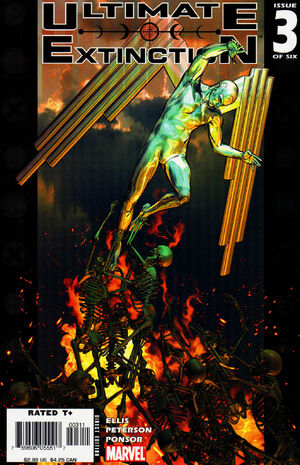 Captain America and Sam Wilson jump out of a S.H.I.E.L.D. helicopter, diving into a street fight between Misty Knight and a chrome foe. Captain America attacks the silver enemy with his Shield, pummeling him to the ground. Sam arrives as back up, swooping down with his metallic wings, guns blazing, hitting the enemy into a car. The chrome being arches his back, electrical bolts emitting from his mouth, taking down Sam. In seconds, Sam and Cap stand back up, finding their silvery foe gone. Cap tells Misty Knight she is under arrest on the authority of S.H.I.E.L.D. Knight argues, saying if they bring her in, they will have to explain themselves to Tony Stark on reasons why they brought in a hero.

Reed Richards and Sue Storm explore a hologram of the N-Zone, examining the various universes there are out there, especially the ones that are older than their own. Reed comes up with an idea, one so terrible, it makes him want to throw up thinking about it. He knows how to harm, maybe kill, Gah Lak Tus but in doing so would be handing Nick Fury the ultimate weapon.

All around the world, graffiti predicting the silver future appear.

The next day, Nick Fury starts briefing Charles Xavier on the current Gah Lak Tus situation. With his unlimited resources, Fury has provided a machine to give Xavier a chance to probe the oncoming threat's mind. Tony Stark makes his way to the Triskelion conference room, meeting with a stressed out Misty Knight. Tony explains to the other heroes that Misty saved a handful of people in a bombing in Manhattan. Because she lost her arm in the event, Tony provided her a prototype he has been working on for artificial limbs. After Tony stands up for the girl, Misty yells at Sam and Steve for wasting their time and not looking for those responsible behind the attack. Tony and Mahr Vehl leave the room, heading out to help Xavier with his psychic transmission.

Xavier gets strapped into the machine that is going to give him the ability to send his abilities into space. As soon as they cut on the machine, Xavier is shocked at his expanded powers before meeting the oncoming destruction. As soon as contact is made, Xavier is mentally attacked, making Jean Grey jump to his rescue. With this meeting, Gah Lak Tus sends out a missile towards the Triskelion, prompting Tony and Mahr Vehl to dawn on their armor, heading to save the headquarters.

Iron Man and Mahr Vehl fly out to the object hurling towards earth. They soon find out this object is not a missile but a living being, made of a silvery chrome just like the one that attacked Manhattan. The two heroes confront their new foe, quickly losing the upper hand, Mahr Vehl receiving the worse of the conflict.

Retrieved from "https://heykidscomics.fandom.com/wiki/Ultimate_Extinction_Vol_1_3?oldid=1565320"
Community content is available under CC-BY-SA unless otherwise noted.