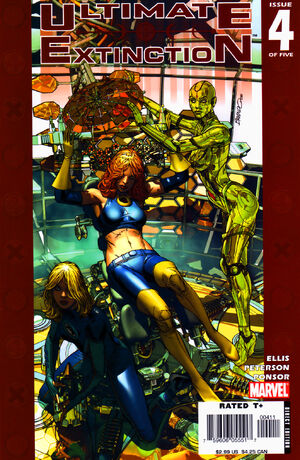 The silver being takes hold of a damaged Mahr Vehl, ready to finish him off. Iron Man sneaks up behind the chrome opponent, grabbing his head and using all his power to tear it off. As he does, the silver being releases an electrical surge of energy, taking down Iron Man, sending all three down to the ocean below. Nick Fury commands his officers to save Iron Man and Mahr Vehl, not worrying about retrieving the creature sent by Gah Lak Tus.

Outside the Triskelion, Sam Wilson gets ready to send Misty Knight back to the mainland, feeling there is too much of a situation happening that he needs to send her off. Misty agrees but before anything can happen, there is an explosion at a near by satellite dish. Misty notices the culprit, Heather Douglas, the bald woman she fought after first witnessing the cult of the silver people. Misty fires upon the intruder, wounding her and giving S.H.I.E.L.D. the chance to capture her.

While all the commotion occurs, Reed Richards calls Nick Fury with a drastic construction project. Reed asks Fury to get him as much Adamantium as possible as he may have found a way to possibly kill Gah Lak Tus. Nick Fury agrees, but Reed and Sue Storm ponder what they are actually doing. Both their morals questioned, Sue refuses to be comforted by Reed.

In the enhanced Cerebro, Xavier speaks of his experience contacting Gah Lak Tus mentally and how much hatred or organic life it possessed. All over the world, people are painting their heads silver as more and more silver beings appear. Jean Grey comes up with a plan to defend them from Gah Lak Tus, but needs Vision in order to accomplish it.

As time passes, the arrival of Gah Lak Tus comes close. Nick Fury, Sam Wilson, Mahr Vehl, and Steve Rogers stand outside of the interrogation room holding Heather Douglas. Mahr Vehl asks one of the others to interrogate her as he has to stay in his suit to heal from the silver man attack. Sam makes not that Heather Douglas is not human but a clone. With this information the four men enter the room, ready to investigate what Heather Douglas' purpose is. Heather is not a clone, she says, but a perfection of her dead mother and raised by the Enclave, along with her brothers and sisters. The family has been trained to meet he perfect emmissary from space and it is their job to meet him, not the others. She reveals she does not work for the silver men, but they teach that suicide is the only way to respond to the arrival of the great entity. Sam Wilson realizes what Gah Lak Tus is doing, it is trying to consume the world with using a little possible energy by ridding the world of any opposition. The clone states they are failing to kill them, as are the heroes so death is inevitable. Steve has a plan that includes Mahr Vehl and the information they received from Misty Knight.

Captain America kicks down the door to the last known location of a silver man, charging in and handling the cult's followers. Cap goes head to head with the silver man, blocking him with his shield and sending a surge of electricity through a taser into the being's neck. The silver being falls back, Captain America charging at him with his shield, defenestrating them both. Cap holds his shield between him and the being, creating a crater in the street. Mahr Vehl flies in, using his powers to amputate the silver man's limbs and taking him into custody.

Xavier and Jean Grey meet with Vision, asking her to join them in the fight against Gah Lak Tus. Vision refuses since it is not in her programming as she was designed to record and not to fight. Jean convinces her that this is an opportunity to record something new to her. Vision becomes excited at this prospect and joins the fight, asking to see Sam Wilson and Mahr Vehl.

Reed Richards stresses out over the amount of Adamantium he lacks and how his workers are taking their time. Reed pressures his foreman to contact Fury, asking for more men to help construct his tool to fight Gah Lak Tus. Reed still feels guilty about doing something that is a crime against nature.

Back at the Triskelion, Fury has been interrogating the silver being he has in his possession, only getting two hours of sleep beforehand. He receives intellegence that Gah Lak Tus has made his way to Mars but before he can do anything about it, the alarms go off, alerting S.H.I.E.L.D. that they are under attack by the clones of Heather Douglas.

Retrieved from "https://heykidscomics.fandom.com/wiki/Ultimate_Extinction_Vol_1_4?oldid=1565321"
Community content is available under CC-BY-SA unless otherwise noted.