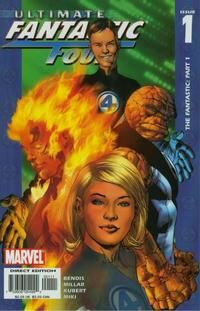 Appearing in "The Fantastic: Part 1"Edit

Synopsis for "The Fantastic: Part 1"Edit

21 Years Ago:
Gary Richards and his wife give birth to their first child, Reed.

11 Years Ago:
Reed is the smartest student at Midtown Middle School. Because of this, he is not very well liked by other students. A group of bullies torment Reed by shoving his face into a toilet in the boys room. But the star quarterback, Ben Grimm, scares them off and walks Reed home. Reed agrees to help Ben with his trig homework.

Arriving home, Reed shows Ben a project he has been working on in the garage. Using scrap and spare parts found around the house, he is attempting to construct his own teleportation device. Reed's bratty sister Enid finds the two tinkering about and threatens to tell their parents unless Reed agrees to teleport her once he gets the thing working. He reluctantly agrees just to get her out of his hair.

Late into the evening, Reed continues to experiment with some stuff up in his room. There is a loud sonic boom and a blinding flash of light. His mother and father race into the room to see what is the matter. His father, who regards Reed as a gigantic burden, berates him thoroughly and tells him that he is grounded.

6 Months Later
Reed introduces a miniature version of his teleportation device at the Midtown Middle School Science Fair. He successfully sends a toy car into a parallel dimension he calls the N-Zone (Or at least he thinks he does. He actually has no idea whether his device works beyond the fact of making the car disappear).

After school, a government agent named Lumpkin arrives at the Richards household. He tells them that he represents a scientific think tank in Manhattan that recruits young geniuses such as Reed. He offers to pay the Richards an undisclosed sum of money for the opportunity to have Reed transferred to their Baxter Building facility. Hungry for money, his parents agree.

Lumpkin takes Reed to the Baxter Building and introduces him to the project's administrator Dr. Franklin Storm. Storm introduces young Reed to his children, Susan and Johnny. He shows Reed that the project has created its own teleportation device, but they have never been able to actually pierce the N-Zone barrier.

However, using the machine as a transmitter, they were actually successful in receiving material information – in the form of a small toy truck. Reed's truck to be exact.

Reed has but one word to describe his awe and wonder, "fantastic".

Retrieved from "https://heykidscomics.fandom.com/wiki/Ultimate_Fantastic_Four_Vol_1_1?oldid=1623988"
Community content is available under CC-BY-SA unless otherwise noted.