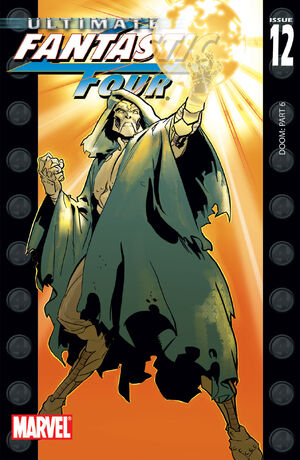 I only met you like twice. And I hate you already.

The Fantastic Four does win its showdown with Van Damme in Denmark. However, Doom activates the Dragon tattoos in his subjects and they all attack the Four. Reed is eventually able to over ride Doom's command and Van Damme is again defeated. Even in defeat, Doom refuses to give Reed the codes he used in their ill fated experiment. Doom says he will die before he gives that information to Reed.

Lumpkin arrives and leads his troops in to take Doom into U.S. custody (for his crime on attacking the Baxter Building in New York last issue). However, Denmark troops intervene and force the Americans to leave their soil. Doom continues to berate Reed, and Reed slaps and slices Van Damme face before boarding his craft for home.

Retrieved from "https://heykidscomics.fandom.com/wiki/Ultimate_Fantastic_Four_Vol_1_12?oldid=1465645"
Community content is available under CC-BY-SA unless otherwise noted.