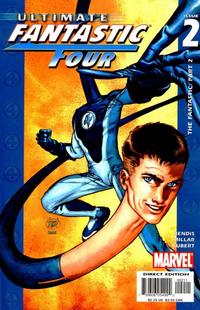 You're creating walking mold in the shape of a man. It's an abomination and it serves no military or sociological purpose.

Appearing in "The Fantastic: Part 2"Edit

Synopsis for "The Fantastic: Part 2"Edit

Dr. Arthur Molekevic, an ugly science teacher at the Baxter Building berates his students for not living up to their expectations and the standards of the project. Most of the students despise Molekevic and make fun of him behind his back. Only one student affords Molekevic any margin of respect – Victor Van Damme, but Victor is likewise disliked by the body of his peers. He is frequently seen as arrogant and isolated.

Reed Richards is still working on the N-Zone teleportation device. But as engrossed in his work as he becomes, he is easily disrupted by the presence of his co-student, Sue Storm.

Reed later returns to his dorm room to find Victor rifling through his notes. Reed is enraged for this invasion of his privacy, but Victor insists that his mathematical computations are incorrect. Reed chases Victor away. Upon studying Victor's alteration of the notes, Reed comes to the conclusion that Victor was correct. He addresses him later and asks Victor if he would like to work with him to further the project.

Later, Dr. Franklin Storm has Arthur Molekevic brought into his office. Air Force general Thaddeus Ross – a sponsor of the project, is present as well. It has been discovered that Molekevic has been illegally conducting bio-technological experiments. His files and data are confiscated and Molekevic is fired from the Baxter Building.

The final large-scale prototype of the N-Zone teleporter is completed and ready for initial testing. The device is erected in the middle of a desert in Nevada. Reed's childhood friend, Ben Grimm arrives to visit him. Reed has enough clout with the project now to allow him access. Reed, Ben, Johnny, Sue and Victor dress in blue and black utility uniforms and stand at ground zero as the N-Zone device is activated. It’s first test is to transmit the contents of an apple through a dimensional breach.

But at the last minute, Reed senses that something is wrong. He shouts, "Wait!" but he is too late. The device is activated and there is a blinding flash of white light that flares across the entire desert.

Retrieved from "https://heykidscomics.fandom.com/wiki/Ultimate_Fantastic_Four_Vol_1_2?oldid=1623989"
Community content is available under CC-BY-SA unless otherwise noted.