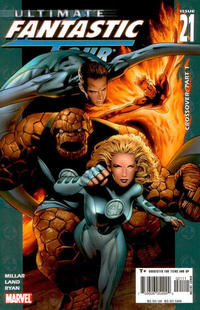 Ever get the feeling you've been had?

Back in the Cretaceous Period (150 million years ago), a Tyrannosaurus Rex is about to attack Ben. He turns around and apparently kills the T-Rex with a punch that sends it a few hundred feet. Reed tells Ben to be careful not to accidentally kill anything, because it could change the future severely. Johnny asks Reed if the guys just made a pit stop in the Cretaceous period. Meanwhile, 50 million years earlier (200 million years ago), Reed tells Johnny that they could have made the jump to the dawn of life in two jumps, because they had more weight than all of them. Sue asks Ben if a rock was still there, to which Ben replies that it is there, but not so big.

As Sue is replying to Ben that the rock is larger than it is in the Cretaceous, the Chrono-Bandits tell Sue to get the U.N. on the phone. They are holding a gun to the first thing to crawl out of the ocean, and are holding it for ransom. However, Sue knocks them all back with a force field while Reed catches the animal. They capture the Bandits, and Sue gets a picture of the creature.

The Fantastic Four return to the present, to be greeted by Captain America inside and a bunch of Paparazzi outside. In the Fantasticar, Reed secretly tells Sue that he is liking the publicity a little bit.

Back at the Baxter Building, Reed is encountered by Dr. Storm, who demands that Reed quit his experiments with the N-Zone, and Reed agrees, albeit crossing his fingers. A little while later, Reed is back in his lab when Sue comes in and reminds him of a chess game with Doctor Hawking. However, Reed continues to work, telling Sue that he has found an alternate Earth similar to theirs but with a few changes and he's been communicating with them. Sue storms out, saying that her dad waited until her mom was dead before getting caught up in his work.

Another (holographic) version of Reed Richards asks this universe's Reed if it was their first fight. He explains that his Sue will be mad for a while before making up. Ultimate Reed asks the other Reed who the child is, to which he replies that it his and Sue's son, Franklin. Reed is shocked at how he and Sue could get together and have kids, to which the other Reed says that that could be one difference with their universes (noting the numbers of superheroes and the Avengers/Ultimates). Ultimate Reed states that he wants to be a superhero, like Spider-Man and Captain America.

Ultimate Reed stands on the teleporter, and the other Reed tells him the others are arriving for a meeting he just called and how he likes his coffee. Reed makes the jump to the other universe, but sees something is wrong. The Baxter Building is in ruins, along with the streets of New York. As he is walking through the streets, he is encountered by a zombified Fantastic Four, and that Mr. Fantastic asks Reed "Ever get the feeling you’ve been had?"

Retrieved from "https://heykidscomics.fandom.com/wiki/Ultimate_Fantastic_Four_Vol_1_21?oldid=1465662"
Community content is available under CC-BY-SA unless otherwise noted.