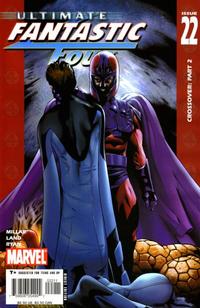 They said it all started with a flash in the sky and a ripple through the clouds.

The background of the other universe is briefly given before going back to Reed and the zombie Fantastic Four. Reed asks them why they brought him to their universe, and they reply that they just ran out of food. Mr. Fantastic wraps himself around Reed, demanding Invisible Woman to trap him in a force field, but she hesitates and Reed escapes into the sewers. Human Torch follows him, but Reed escapes into the streets, where Spider-Man webs him up against a wall. They all talk about "missing a fantastic specimen running through Manhattan." However, Hulk comes through a building and tries to eat Reed, but is hit by a semi truck. The other zombies run from a rain of cars, controlled by Magneto. Magneto tells Reed that he "is all he has right now."

Meanwhile back at The Baxter Building, Johnny asks Sue where Reed was. They travel to Reed's lab along with Ben, and they encounter Reed's teleporter. Back in the other universe, Magneto shows Reed his refuge, made out of a railway tunnel blocked with cars. Reed encounters three other survivors, one of whom points a gun at Reed, saying that Reed was a super hero and will be infected. Magneto tells her to put her gun down and introduces the other survivors, a man and his diabetic daughter named Mindy (who is running low on insulin). Mindy and Magneto ask Reed if he is related to Mr. Fantastic from that universe, to which Reed replies that he's from another universe. Magneto asks Reed that if he's given the infected a chance to go to another reality, which Reed realizes that Magneto's right. But back at Reed's lab, the teleporter becomes activated. Sue asks if Reed is coming through, but its revealed that it is the zombie Fantastic Four.

Retrieved from "https://heykidscomics.fandom.com/wiki/Ultimate_Fantastic_Four_Vol_1_22?oldid=1465664"
Community content is available under CC-BY-SA unless otherwise noted.