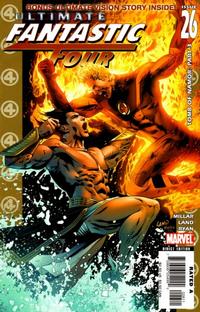 The Fantastic Four battle Namor in Manhattan, Namor taking the upper hand and knocking the Thing streets over and the Human Torch unconscious. Mary and Franklin Storm work in the background, trying to contact the Ultimates and the X-Men but have no luck. As Sue is being attacked by Namor, Reed comes to the rescue, arriving in Fantastic Oh-Five, giving him the strength of Grimm, the shields of Sue, the fire power of Johnny, and his own stretching ability. While medics check on the other team members, Reed takes a hold of Namor, using the fantastic four's powers against him. Namor fights back but has difficulties getting through Reed's shields. Namor does not see what Sue sees in Reed when she could have a God, like him. Namor finally breaks through the shield protecting Reed, taking him out of the Fantastic Oh-Five.

Reed regains control of the fight by keeping his helmet. His helmet allows him to project his subconscious to fight an enemy. After creating a giant barely clothed Mary Storm, Reed brings in constructs of the world's heroes. Namor is punched by Iron Man, Captain America, Thor, and Wolverine all at once, sending Namor down to the floor. As the illusions pin him down, Reed is alerted that he is draining the power from the east coast, which could cause a nuclear meltdown. Franklin cuts Reed off, making the constructs disappear before Namor is taken down. As Namor gets his hands around Reed's neck, he is flung away by Sue's power, her standing there to protect her boyfriend. Sue calls her brother over, who uses his power to create a fire to engulf Namor.

Namor lays helplessly on the ground but refuses to surrender. He stands, raising his hands to the air causing the sky to turn black. A huge being made of water appears above the city, trident in hand. Namor scoffs at the Fantastic Four, revealing his power to the world. Sue asks Namor what do they have to do for him to just go away. All Namor asks for is a deep kiss with Sue, right there in front of her boyfriend. As it is a simple request, Sue kisses the Atlantean as Grimm holds Reed back. Namor grins at Reed and tells him that Sue "meant it" before flying off, leaving the city.

At the Baxter Building, Mary Storm comes by to say bye to her daughter, fulfilling her wish to leave after the Fantastic Four helped with Atlantis. While Sue feels alright with her mother staying, Mary has things to take care of as the company in charge of her research has a new owner. Sue asks if the new owner happens to be Victor. Mary denies Doctor Dooms involvement and walks away, revealing a green dragon tattoo on her back.

Retrieved from "https://heykidscomics.fandom.com/wiki/Ultimate_Fantastic_Four_Vol_1_26?oldid=1548471"
Community content is available under CC-BY-SA unless otherwise noted.