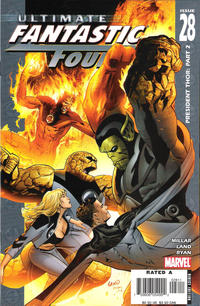 By preventing the accident which gave them their powers, the Fantastic Four have created a world where Thor is President of the United States in an apparent Utopian World. Every person on the planet has superpowers in some form or another. It is revealed that due to the successful N-Zone teleportation experiment, mankind have made first contact with the alien Skrull race. The Skrulls helped mankind find their super-genes.

That is, all but one human who has decided not to evolve into a super hero - Ben Grimm. After a conversation with Franklin Storm, it is revealed the Baxter Building has had an apparent follow up attack by Doctor Doom. In the course of the discussion, Ben reveals he never took the Skrull pill which gave everyone their powers out of happiness with being human and fear of becoming a "freak like Victor." In this life, Ben Grimm has a girlfriend named Jasmine who possesses powers of flight. During a stroll through the street, the mysterious Skrull from the previous issue once again teleports and disappears in plain sight.

The Skrulls appear before Washington as honored guests of Thor. Ben recognizes their leader, Super Skrull, to be the one who teleported in front of them moments ago. Later on in the day, Sue Storm makes a surprise visit to the Skrulls' quarters to deliver a cake. As she enters the halls she overhears that the pills they have given Earth have side effects which will allow the Skrulls to conquer the planet. Sue attempts to listen in by becoming invisible, however Super Skrull shoots her with an energy blast which knocks her to the ground. Super Skrull's Exo Skeleton Suit allows him to replicate any power within 1,000 miles, hence he could see her. He then picks her of the ground and finishes her off with a laser blast to the head. The Skrulls put their invasion plan into action.

Moments later people in the streets start to age rapidly much to the shock of Thor who is witnessing the whole ordeal. Reed, Ben and Jasmine try to tell Super Skrull that something is wrong with the pill. He admits to the side effects of their powers. Reed then notices Sue's dead, shriveled corpse on the ground.

Retrieved from "https://heykidscomics.fandom.com/wiki/Ultimate_Fantastic_Four_Vol_1_28?oldid=1465676"
Community content is available under CC-BY-SA unless otherwise noted.