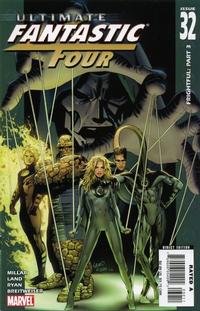 In an earlier scene in Latveria, Victor Van Damme uses ancient Atlantis magic to switch the minds of Reed Richards and himself. As Reed complains about Victor's heavy body, Victor states that he left Reed with a lot more than he (Reed) left him, as he (Victor) is too honorable to leave him with nothing.

An hour later in New York, due to the Baxter Building lockdown, the Fantasti-Car is forced to land on the street, where Franklin Richards is standing outside with Nick Fury and his Ultimates. Franklin runs up to the team, explaining they have about an hour before the zombie Fantastic Four release their friends into this universe. Even though the Ultimates are on standby, Johnny is Reed (Victor)'s priority, ignoring the zombie threat since he made a whole battle plan on the ride over. Reed (Victor) makes his way to Johnny's room, clearing out all the staff.

Upstairs, the zombies learn of Reed's arrival but laugh at him pulling all his resources to Johnny. They become cocky, that they will be able to escape, even though they are locked in by a barrier that can withstand a nuclear explosion. All they need is the strength of Grimm, Hulk, and Thor to break down the barrier and let their friends in.

Johnny lies on his hospital bed placed in the center of a pentagram and candles. Johnny admits he is a bit relieved that the zombies broke loose. Johnny believes that the military would force his father to toss him in the N-Zone in order to protect the world from the growing being inside him. Reed assures him that nothing like that will happen and the only thing that will be going into the N-Zone will be the Zvilpogghua.

Nick Fury is getting frustrated, wishing they had forced Reed to deal with the zombies before Johnny. Franklin defends him, saying if he needs Johnny on his side first, he is not complaining as Reed hardly makes mistakes. Fury corrects him by reminding him of how the Fantastic Four got their powers.

Back in Johnny's room, Reed (Victor) starts his exorcism of the Zvilpogghua, an event that every living being in the area can feel. Everyone waits for news if the creature has been taken out of Johnny. Reed (Victor) is successful in removing the Zvilpogghua but not in the way he wanted. Instead of sending the creature back to the N-Zone, the creature moves through the body. Since the creature needs a powerful being to survive in, it ricochets out of the room. Reed calls downstairs, telling them to get Thor as far away as possible since is is the most powerful being in the area. Outside Iron Man tells Thor to get down as the creature comes crashing out of the Baxter Building. The creature bypasses Thor, leaving the heroes to wonder who the creature is aiming for. To their surprise, Victor (Reed) stands at the end of the block, taking the creature into his chest.

The Baxter Building drops its shields, alerting the zombies inside that they are free to escape and feed. As zombie Johnny hotheadedly rushes out into the hallway, only to be stopped by Victor (Reed)'s metallic sealer, covering him and putting out his flame. Grimm attacks next but is quickly taken by Victor (Reed), getting his arm pulled off and used against him. The zombies are starting to realize that this version of Doctor Doom is tougher to fight since every part of him is metal. Sue cannot create a force field in his brain, and Reed has no where to bite in order to spread his infection. Victor (Reed) explains that even with all the Atlantis enhancements and spells, there is no way the zombies can penetrate his defenses. Victor (Reed) shows the two remaining zombies the extent of his power, deteriorating Sue's bones and filling Reed with maggots.

Franklin makes contact with Victor (Reed), asking for an update on Zvilpogghua. Victor (Reed) tells Franklin everything is going to plan and the zombies are going with him back to their universe. Franklin is surprised by Victor's antics, having misjudged him in the past. It is then the real Victor surprises everyone by revealing himself in Reed's body. Reed toys with Victor's ego and honor, joking that this is not the first time he has suffered for Victor's mathematical error. With that, Victor summons the power to swap minds with Reed once again in order for the records to say he was the hero through all this and sacrificed his own life. Before stepping through the teleporter, Victor asks of one last request that he is in the record books for this feat of carrying the Zvilpogghua.

Victor enters the other universe at the same time the zombie version of Earth heroes are devouring Galactus. When the zombies notice the living in their presence, they leap at the opportunity to feast, Victor seeing this as a new challenge.

Back in New York, the city celebrates the Fantastic Four and how they saved the world. Sue explains to Johnny and the rest of the group that this was her mother's plan from the beginning, all the way to the end result. Mary Storm is now in charge of Latveria and plans on solving the world's energy crisis with all the technology from Atlantis. As the Fantastic Four's popularity grows, the group start to come to realizations of what they can do with their power and how they effect the world around them.

Retrieved from "https://heykidscomics.fandom.com/wiki/Ultimate_Fantastic_Four_Vol_1_32?oldid=1549172"
Community content is available under CC-BY-SA unless otherwise noted.