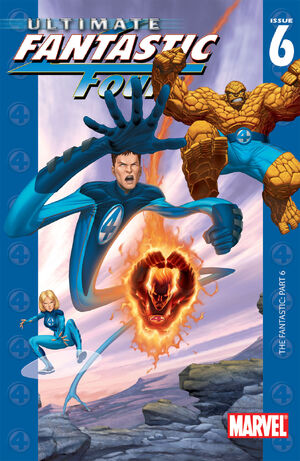 Appearing in "The Fantastic: Part 6"Edit

Synopsis for "The Fantastic: Part 6"Edit

Deep in Mole-Man's subterranean domain, Reed Richards, Ben Grimm and Johnny Storm find themselves surrounded by Ani-men. Mole-Man is also present along with Sue Storm who has been missing since the accident. Johnny flares up, blinding Mole-Man and his horde while Sue runs to her three friends. Mole-Man begins to welcome his former students to his world but Sue quickly explains that he is a madman, he’s jacked into the Baxter Building mainframe and he’s been watching them. Sue goes on to explain that she has been kidnapped and he’s obsessed with Reed and her father Professor Storm. Reed suspects that Dr. Molekevic may have sabotaged the experiment.

Molekevic becomes enraged by Susan’s betrayal and he orders his Ani-men to dispose of all four of them. Thousands of Ani-men close in on them as Reed tries to reason with Mole-Man to no avail. The pounding of Ben Grimm’s massive frame begins a subterranean earthquake. The floor opens up and Molekevic falls into the crevice. Reed tries to grab him but comes up short as Mole-Man plummets downward.

With everything crumbling around them, Sue forms an invisible bubble around them and lifts them back to the surface and to safety.

Back at the Baxter Building Susan and the others are reunited with her father, Professor Storm. Reed is still confused as to why this accident that transformed them happened and concludes that they must find Victor Van Damme, the final member of the team, in order to find the answers he seeks.

Retrieved from "https://heykidscomics.fandom.com/wiki/Ultimate_Fantastic_Four_Vol_1_6?oldid=1623991"
Community content is available under CC-BY-SA unless otherwise noted.