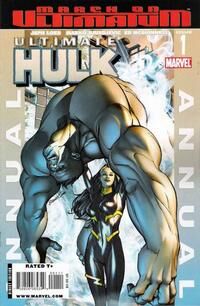 Hulk will get pancakes, waffles, eggs -- or Hulk will smash.

Appearing in "No Shoes, No Shirt, No Pants, No Service!"Edit

Synopsis for "No Shoes, No Shirt, No Pants, No Service!"Edit

After a battle between Zarda and Damage Control, Captain America recommends that she takes some time to explore the American heartland and get a taste for this reality's culture. Reluctantly, she agrees.

Zarda travels west to Kansas where she stops at a diner called Appletite's. Unfortunately, the Hulk decides that he wishes to dine here as well. The Hulk lumbers inside the establishment, naked and demanding pancakes. The staff informs him that no shirt, no shoes, and especially no pants, equals no service. Naturally, the Hulk doesn't take kindly to this and he begins wrecking the place. Zarda intervenes and the two get into a massive fight. Amazingly, Zarda succeeds in defeating the Hulk by punching him square in the gamma bombs. After which, the two develop an interest in one another and go to Appletite's for pancakes, then to a motel room for sex.

Retrieved from "https://heykidscomics.fandom.com/wiki/Ultimate_Hulk_Annual_Vol_1_1?oldid=1510777"
Community content is available under CC-BY-SA unless otherwise noted.