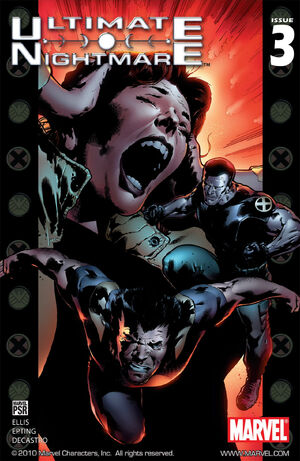 In Tunguska, both the X-Men and Nick Fury's strike force arrive at about the same time to an abandoned bunker. Fury's team tries to deduct a reasoning behind what has been happening at the bunker. Widow realizes that the bunker has been abandoned since 1994, with its occupants just leaving. As they journey further down in the catacombs, they discover a living individual. The individual sits against the wall, its long hair covering its face. Within seconds they lose sight of the mysterious being, before realizing it has moved right next to them. The being continues to laugh, tilting his head back and revealing his horn. The horn fires an electrical bolt, a bolt that creates an electrical bulletproof shield. As it powers down, Samuel Wilson pulls out his wings, taking a swing at the creature. This attack allows the being to be fired upon, killing him. Sam examines the being, cutting away at its horn, finding out it was implanted before the skin grew over. Fury calls for a team to take the creature away only to realize that his radio has been silenced.

The X-Men continue their own investigation of the bunker, Jean's mind leading the three to the source of the disruption. Wolverine uses his claw to create a torch, lighting their way. They soon come to a dead end. Wolverine uses his claws to tear through the barrier only to find out it was a next for something bigger. Colossus takes lead, pummeling into this new creature. Colossus comments on how the creature needed to stay dry to keep from rusting. The creature pounds Colossus into the ground, breaking the floor underneath them. While this new creature does not survive the plunge, The X-Men find themselves surrounded by the same creature Fury and his team discovered.

Retrieved from "https://heykidscomics.fandom.com/wiki/Ultimate_Nightmare_Vol_1_3?oldid=1461871"
Community content is available under CC-BY-SA unless otherwise noted.