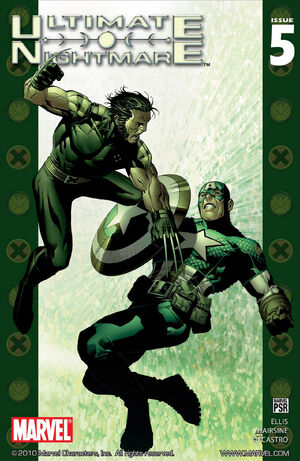 As Samuel Wilson works on opening up the hatch, Captain America readies for a fight against his Russian counterpart. Each opponent stare one another down waiting for the other to make the first move. After determining his weakness, Captain America goes after Russia with full force. Shields and fists fly as both super soldiers fight, but it is Cap's shield that breaks the competition. Captain America teaches Russia that the true nature of fighting, and that is winning. Cap kills his Russian counterpart and makes his way to the hatch.

Samuel Wilson opens up the hatch and to the discovery of Nick Fury's team, the source of the transmission comes from a dismantled robot. Before the team can speak to the robotic being, the X-Men come crashing in the opposite door. Both teams, full of aggression, fight, Fury with guns blazing. Jean is shocked that the being sending out a distress signal is not even human. As the X-Men gain the upper hand, Fury's team taking the counter. Samuel Wilson is pitted against Colossus and quickly figures out the weakness behind his eyes. Wolverine is attacking Fury but as he goes for the win, Captain America grounds him with a grenade.

With Fury's team win, they make contact with the robotic being. The robot reveals itself as Vision. A hundred years ago, Vision came to Earth to warn them of what is coming. Vision crash in Tunguska put him in a repair coma, where it was found and buried by explorers. Over the next few decades, parts were taken from its body faster than it could repair itself. It was not until recently its broadcasting cortex became available. Vision sent images of previous civilizations taken hold by the on coming threat, the threat called Gah Lak Tus.

The X-Men pull themselves away from the Fury's team, placing themselves outside of the bunker. Jean feels betrayed that the distress call was not from a mutant. Wolverine is angry that Xavier and Jean have no clue what is really going on even though Xavier is seen as this great person.

Back inside the bunker, S.H.I.E.L.D. arrives to extract Fury's team and Vision. Fury leaves Vision in the care of Samuel Wilson, to spend every hour figuring out what is exactly coming to get them.

Retrieved from "https://heykidscomics.fandom.com/wiki/Ultimate_Nightmare_Vol_1_5?oldid=1461875"
Community content is available under CC-BY-SA unless otherwise noted.