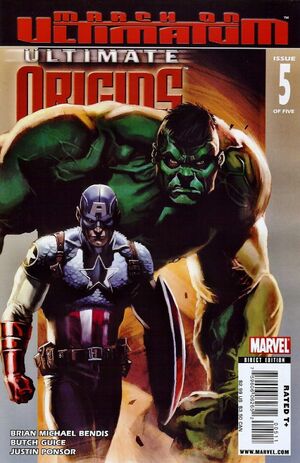 The birth of heroes. The birth of a new species. Your species just now taking responsibility for the science it has discovered. All these things plus so many more. Your wars, your passions, your plagues, your emotions... Understanding. Misunderstanding. We have observed all of it. From afar and up close. We have witnessed this from not only your world but countless other worlds of similar design and model. And we now know that your devastation is coming.

The Watcher, speaking through Susan Storm, introduce itself as Uatu. Uatu, speaking for his species, explains to everyone present that it and its species have been solely watching humankind and other lifeforms in the universe for years, even when they are fully present to them. For so long they have witnessed the emergence of heroes on Earth and from their observations knows that something of great devastation awaits for the planet. Uatu then announces that its brethern are pending to pick a herald to help brace the oncoming cataclysm.

Years ago. Nick Fury leads a SHIELD team in assaulting Weapon X in Alberta, Canada for a supposed illegal assassin training camp. Fury and his team stormed the facility and shockingly discover an entire lab containing imprisoned and experimented mutants. One of Weapon X's leading scientist demands Fury for his appearance and received a blow from the agent. Fury then demands the scientist, Dr. Malcolm Colcord, for what he and his people are doing. Colcord blithely tells Fury that they are creating mutants. It is revealed that homo superior are actually created by humans. The true creators of the mutant gene. Fury, then realizing that neither man nor mutant should ever know of man's involvement in the mutant gene, kills Colcord and orders his men to do the same to the other scientists and the captive mutants, and destroying the facility. However, Fury see to a young captive T'Challa, who Fury feels a common connection between them of sharing a tragic past, and rescues him.

In the Savage Land, Charles Xavier is speared in the back as a act of retaliation by Magneto who claims Charles tried to attack him in his own mind. Magneto speaks of the mutant race's fate to ascend like gods over homo sapien and his belief that God willed this to be.

In the present day. Uatu announced that the Watchers had finally chosen their herald. Just as the Fantastic Four questions Uatu as to who the herald is, Susan is disconnected from Uatu, who then suddenly disappears along with the other Watchers who were present around the world as informed by Carol Danvers from her reporting agents. While the Fantastic Four wonder who the Watchers' chosen herald could be, in a suburban neighborhood in Manhattan Rick Jones is found by his family glowing in the backyard.

Retrieved from "https://heykidscomics.fandom.com/wiki/Ultimate_Origins_Vol_1_5?oldid=1461881"
Community content is available under CC-BY-SA unless otherwise noted.