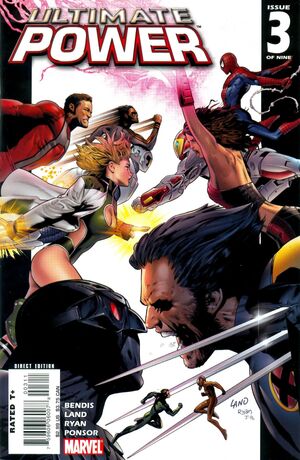 In the Earth-31916 universe, the President of the United States is moved to a secure bunker by the Secret Service, where he learns that an unknown, rapidly-growing organism has overwhelmed much of the Eastern United States. The Squadron Supreme are battling the organism and rescuing civilians when Hyperion discovers that the source of the organism is one of Reed Richard's probes.

The Squadron Supreme analyze the device and inadvertently trigger it. A holographic projection appears with an audio greeting from Richards and snapshots of the Fantastic Four and his universe. Hyperion, deducing that Richards knows about the organism and is responsible for it, immediately organizes an invasion force to apprehend Richards from his own dimension.

In the Earth-1610 universe, Hyperion demands Richards return with them to solve the problem and stand trial for crimes against humanity. Reed agrees, despite fierce resistance from Invisible Woman, and disappears with the Squadron Supreme. Nick Fury immediately begins assembling a rescue team from elements of the X-Men, Ultimates, and Fantastic Four.

Retrieved from "https://heykidscomics.fandom.com/wiki/Ultimate_Power_Vol_1_3?oldid=1461886"
Community content is available under CC-BY-SA unless otherwise noted.