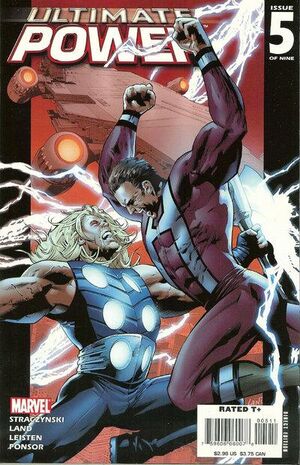 Thor and Hyperion charge to face one another. Spider-Man and the FF watch from the deck windows of the SHIELD Helicarrier. The two powerhouses trade blows with one another, and Nick Fury decides to send the Human Torch and the Invisible Woman to give Thor back up.

Sue encases Hyperion inside of an invisible force field. He punches the inside of the field and the reverberations generate painful feedback for Sue. She opens up a small hole in the field, and Johnny begins channeling his flame into it. The heat is intense, but Hyperion perseveres. He intensifies his plasma to nova-blast level, incinerating Hyperion's costume. Hyperion uses his eye-blasts to weaken the structural integrity of the field and ultimately breaks free. Thor tries to tangle with him, but Hyperion snatches the hammer from his hands and punches him back down towards the city.

On the Helicarrier, Captain America suspects that General Fury is not being entirely forthright with him. Cap and Spider-Man exchange messages, indicating their concerns to one another.

In Washington, armed guards escort Reed Richards down a corridor. He hears a commotion and finds a window to see what is happening. He sees the Ultimates engaging the other members of the Squadron Supreme.

Retrieved from "https://heykidscomics.fandom.com/wiki/Ultimate_Power_Vol_1_5?oldid=1519448"
Community content is available under CC-BY-SA unless otherwise noted.