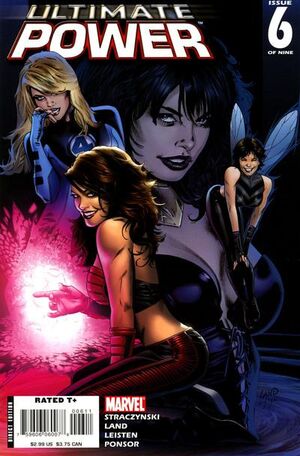 I knew there was something going on. I could feel it. And it had everything to do with you.

The Ultimates engage the Squadron Supreme, each hero fighting counterparts who are startlingly equal to one another. Reed Richards, now aware that his friends are attempting a rescue mission, pleads with Dr. Burbank to speak with them. Burbank is unsympathetic, rendering Reed unconscious with an odorless, colorless gas.

In the bowels of the S.H.I.E.L.D. Helicarrier, Fury suits up for battle before conferring with the unseen conspirator, outlining his plan to steal the probes and escape back to Earth-1610. Moments later, the conspirator betrays him, knocking him unconscious. S.H.I.E.L.D. guards responding to the sound are likewise dispatched.

Spider-Man awakens Fury, and both rush to the bridge to see that Doctor Doom, revealed as the unseen conspirator, has defeated the Squadron Supreme and the Ultimates and is ready to conquer Earth-31916.

Retrieved from "https://heykidscomics.fandom.com/wiki/Ultimate_Power_Vol_1_6?oldid=1528730"
Community content is available under CC-BY-SA unless otherwise noted.