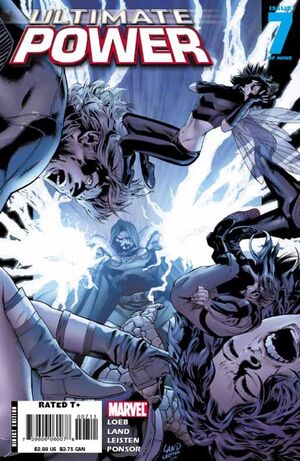 Now, Hyperion... you will learn what it is to bring forth a god without mercy.

Aboard the Helicarrier, Spider-Man confronts Nick Fury about Dr. Doom's involvement in the Supreme Universe. Fury reveals that he recruited Dr. Doom to alter Reed Richard's probes to transmit information to S.H.I.E.L.D. before reporting back to Richards.

In Earth-31916's Pentagon, Burbank gloats to an unconscious Richards that the Defense Department approached him to develop a weapon to kill Hyperion. The alien organism raging across the country is the result, with Richard's probes serving as a scapegoat to eliminate the trail to the Defense Department. Reed, previously feigning unconsciousness, takes Burbank hostage and demands Burbank to reveal the truth to the world.

Aboard the S.H.I.E.L.D. Helicarrier, Fury leads Spider-Man to the hanger of the Helicarrier to reveal his secret weapon, a drugged and unconscious Hulk.

In the Pentagon, the X-Men rescue Richards. Before they can escape, the roof disintegrates, leaving Richards and the X-Men staring at Squadron Supreme of Earth-712, who declare that their world too was destroyed and that they too demand answers.

Retrieved from "https://heykidscomics.fandom.com/wiki/Ultimate_Power_Vol_1_7?oldid=1461895"
Community content is available under CC-BY-SA unless otherwise noted.