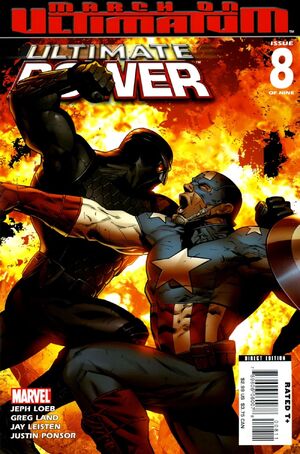 The Earth-712 Squadron Supreme attacks the Ultimate force, with all sides clearly confused about the presence of more doppelgangers in Earth-31916. On the street, Thor defeats Hyperion and prepares to rejoin the melee when he is stopped by Dr. Spectrum, who reasons with Thor and asks him to help seek out the truth behind the entire affair.

On the Helicarrier, Nick Fury orders Spider-Man to oversee the Hulk and act as his "conscience" as Hulk leaps into the fray.

Retrieved from "https://heykidscomics.fandom.com/wiki/Ultimate_Power_Vol_1_8?oldid=1461897"
Community content is available under CC-BY-SA unless otherwise noted.