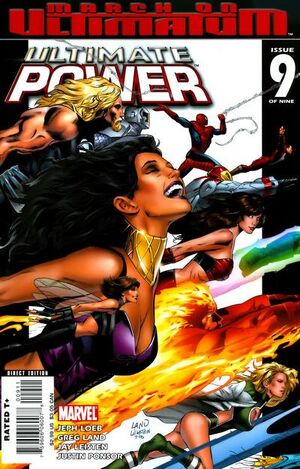 Both Arcannas succeed in helping the Scarlet Witch return the Earth-712 heroes to their own universe. Nick Fury and Emil Burbank are taken prisoner by the Squadron, both identified as responsible for the worldwide disaster in Earth-31916. Doctor Doom, the third co-conspirator who escapes apprehension, is promised to the Squadron Supreme when the Ultimates capture him. To ensure their full cooperation, Zarda volunteers to travel to the Ultimate Universe to ensure their complicity.

Back in Earth-1610, Captain America discusses the considerable power of Scarlet Witch's abilities and mentions that Carol Danvers is in the front-running to become the new leader of S.H.I.E.L.D. Back at the Baxter Building, the Thing attempts to come to terms with his permanent condition, but takes solace in being able to defeat the Hulk.

Retrieved from "https://heykidscomics.fandom.com/wiki/Ultimate_Power_Vol_1_9?oldid=1565319"
Community content is available under CC-BY-SA unless otherwise noted.