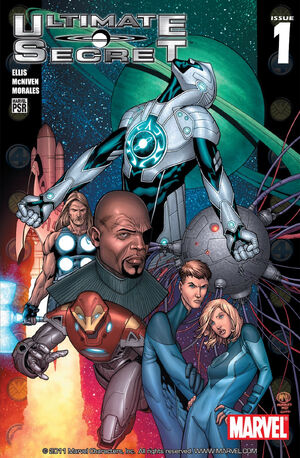 Oh, now you confirm my identity. I hate Killforms. Does "disavowed" still mean "blasted to sludge and turned into a protein drink"? Tell Yahn Rgg he's a rectal wart and I'll kill him for this.

Military personnel pull out their weapons as a car approaches the gate to S.H.I.E.L.D. Aerospace Development Station 9. The guards come around to the driver-side window of the car to find out the identity of the driver. He reveals himself to be Dr. Philip Lawson, arriving at the base but with Carol Danvers' security protocols, has to be fully identified before he is allowed inside of the gates.

Inside the compound, Carol Danvers gathers a group of men and women briefing them on the symposium, which at the end, the group is to witness the launch of a new space vehicle, Asis. Col. North enters the room, introducing the people behind the Asis program, Luis Sutton, David Binder, and Philip Lawson. Lawson makes his way around the room, meeting Dr. Franklin Storm. Lawson explains that the Asis is a propulsion project vehicle powered by nuclear energy in order to open up a zero point zone to create both limitless power and artificial gravity.

As Lawson explains the dynamics of the zero point zone, Carol Danvers receives information of a security breach on the premises. Outside, troops gather but are blown away by an unknown force. Footprints appear in the dirt, walking away from the destruction it just caused and towards Asis. Danvers establishes a building lock-down keeping the crew from getting near the damage. While everyone stares at the explosions, Dr. Lawson adjusts his watch, his eyes growing green and giving him the ability to see the being attacking the base. Lawson recognizes the being and sneaks off from the rest of the group and into an empty office. Lawson strips off his clothing and powers up his wristwatch, his skin becoming covered in armor and energy.

The new Lawson goes invisible before escaping through the office window to meet his foe. Lawson comes face to face with the being, revealing them both to be from the same organization. Lawson's true identity to be Mahr Vehl before figuring out the being, which is a Kree killform, will not listen to him or abandon its mission. The killform and Mahr Vehl start their fight, Mahr Vehl making his opponent visible. As he realizes he cannot defeat the killform, Mahr Vehl flies towards Asis, opening a hole in the side to retrieve the nuclear-electric device. The killform fires onto the Asis, destroying the ship in a massive explosion.

Retrieved from "https://heykidscomics.fandom.com/wiki/Ultimate_Secret_Vol_1_1?oldid=1461903"
Community content is available under CC-BY-SA unless otherwise noted.