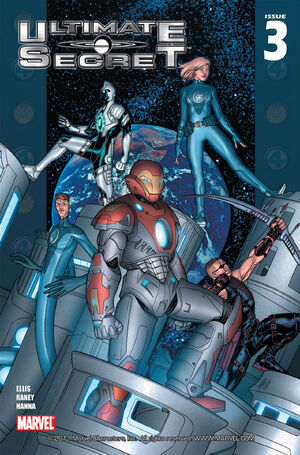 The Fantastic Four arrive at the Triskelion, homebase to the Ultimates, amazed by their surroundings. Iron Man helps Sue Storm out of the Fantasti-Car, flirting with her every step. Sue points at Reed, mentioning to Iron Man that he is her boyfriend, Reed examines every mechanical aspect of the Triskelion. Grimm and Johnny meet Thor, who complements them on their appearance, stating they look like true heroes. Feeling honored to be called heroes by Thor, Johnny and Grimm become excited, becoming more ecstatic when Thor invites them to drink beer with him.

The group of heroes gather in a briefing room, joined by Carol Danvers and Philip Lawson, who in reality is the Kree Mahr Vehl. Nick Fury leads the group, explaining how aliens hang around Earth for various reasons. Fury gives the team the back story, how months ago S.H.I.E.L.D. discovered Vision, a herald sent to warn of the approaching threat called Gah Lak Tus. The problem is that they discovered Vision a hundred years late, giving them only weeks before Gah Lak Tus arrives. Gah Lak Tus has been traveling from planet to planet wiping out the technological advanced ones.

Reed becomes amazed, realizing that this is the answer to why can't they hear other civilizations if the galaxy is full of them. Mahr Vehl interrupts, telling the team that no one knows what Gah Lak Tus is since the knowledge of it is protected by the Kree Supreme Intelligence, figuring if anyone knew of Gah Lak Tus they would go mad. The captain of his Kree vessel, Yahn Rgg changed after being briefed on the true nature of Gah Lak Tus, trapping everyone on Earth to witness a perfect extinction.

Mahr Vehl wants the opposite having fallen in love with Earth's culture, thus helping create Asis to help humanity live. The team decides that they should try and launch Asis again in order to bring out the Kree Killform, giving them the chance to successfully accomplish the Asis mission and get the information to defend Earth from Gah Lak Tus. As the ship launches, a ground team of superheroes will hold the Killforms back in order to accomplish the mission.

On a plane heading for New York City, Clint Barton and Natalia Romanova practice with Clint's bow and arrow. They discuss the mission at hand, Clint will be traveling with the Asis team while Natalia will remain with the ground team. Clint admits he dislikes working with the super powered as their egos get the hold of them, realizing one day they are all going to die.

Reed, Tony Stark, and Lawson finish wiring the ship, making it invisible to the Kree. Both Reed and Tony become curious on Lawson's other form, convincing him to change in front of them and show them his true form. Lawson transforms becoming Mahr Vehl, amazing the other two with this alien technology.

The Asis and ground team get ready for launch. As expected, the Kree send their Killforms down to the planet to stop Asis from taking off. Iron Man launches the ship, the Killforms not being able to notice the ship heading for space. As the ship reaches the Earth's atmosphere, Nick Fury comes charging out with his team of troops and superheroes, ready to take down these extra-terrestrial beings.

Retrieved from "https://heykidscomics.fandom.com/wiki/Ultimate_Secret_Vol_1_3?oldid=1551554"
Community content is available under CC-BY-SA unless otherwise noted.