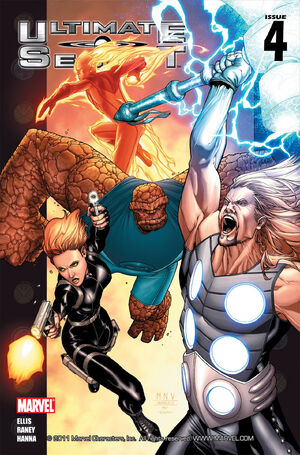 Nick Fury leads his troops and heroes to the Kree Killforms. Fury commands Thor to create an electromagnetic pulse to disable the Killforms' teleportation function. Thor raises Mjolnir, already knowing what to do since he was part of the briefing, striking it down and creating an electrical force.

In space, the Asis crew fly their shuttle into a Kree spaceship. Mahr Vehl assures the team that they are invisible to the Kree cruiser, making it a safe bet that they can land inside without being noticed. Tony Stark, while amazed at the massive vessel, flies the Asis into the landing bay, curious on how to land the Asis inside. Mahr Vehl tells Tony that he does not need to land the ship as the Kree vessel does it for them. The Kree vessel cradles the Asis, reaching up and placing them smoothly on the platform. Hawkeye takes control of the mission, telling Sue and Reed to stay in behind Iron Man, Mahr Vehl, and himself seeing the Fantastic Four are not the heroes who take lives. Hawkeye continues his cynicism, complaining about how he is stuck on Fury's team and on an alien shuttle. Mahr Vehl stops him, pointing out the Kree further down the corridor. Hawkeye pulls back on his bow, firing upon the Kree killing each one.

Back on Earth, Thing is having a surprisingly good time clobbering the alien menace, excited to be fighting along side a couple of the Ultimates. As a new weapon appears to firing at Thor, Thing jumps in the way, protecting Thor from the beam of energy. Thor jumps out from behind the protection of Thing, striking Mjolnir at the ground once more in the center of these beasts.

The Asis team are attacked by Kree footmen firing energy blasts at the heroes. Iron Man, Mahr Vehl, and Hawkeye fire back, only to be saved by Sue Storm and her use of her invisible force. The shipthane, Yahn Rgg, contacts the Asis team, stating he can see everything and understands they are on their way to see him. Before they can do that, Yahn Rgg changes the physical make-up of Mahr Vehl, overriding his surgical disguise systems, making him look more like his species. Mahr Vehl becomes exhausted from the transformation, Hawkeye pressuring the team to leave him behind, wanting everyone's hands free in case they run into more security. Sue refuses, Reed following her notion, calling Hawkeye a brainless jerk.

The team make it to the head of the ship, finding Yahn Rgg encased in a personal escape sled. Mahr Vehl explains that if it is deployed, the ship will self destruct. Hawkeye panics, angry that with Mahr Vehl slowing them down and they have abandon the mission to survive. Yahn Rgg claims Mahr Vehl was the first choice to lead this mission to Earth as he was one of God's chosen. Rgg now laughs, seeing that Mahr Vehl has gone insane on Earth. Mahr Vehl disagrees, knowing that the knowledge of Gah Lak Tus has been the downfall of Yahn Rgg. Mahr Vehl takes the information about Gah Lak Tus from the Kree ship system, hoping to use it to save Earth from the cosmic being. As Yahn Rgg snickers, knowing the team will not escape before the ship destructs, Sue uses her powers, along with Hawkeye's arrows, to jam the personal escape sled, leaving him from escaping the oncoming destruction. As Yahn Rgg struggles, he tells the earthlings that they will not escape Gah Lak Tus because no one ever does. Only the Kree survive because of what they have learned from each Gah Lak Tus event. Sue thanks him for the information, creates a shield around her teammates and herself, and escape the exploding Kree vessel.

Down on Earth, Nick Fury gathers the corpses and living specimen left over from the Kree battle. Once the Fantastic Four go on their way, he is going to burn the bodies and examine the rest. Carol Danvers will now be a bodyguard to Mahr Vehl, who will now work with Sam Wilson, using Vision and the Kree database to figure out what the world needs to be saved from.

Retrieved from "https://heykidscomics.fandom.com/wiki/Ultimate_Secret_Vol_1_4?oldid=1549178"
Community content is available under CC-BY-SA unless otherwise noted.