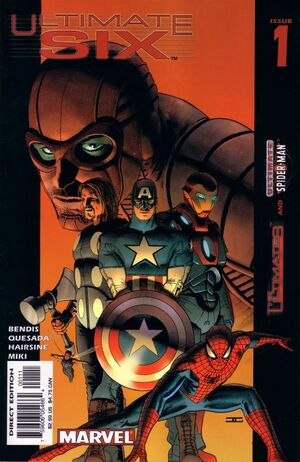 There will be six.

Max Dillon, Electro, awakens after weeks of being in a coma. Escaping the hospital, he is only stopped by the Ultimates. Together in one group, Max Dillon, Norman Osborn, Otto Octavius (with his arms removed), and Flint Marko, are in S.H.I.E.L.D. prison. Sergei Kravinoff goes on live television, announcing that he changed his D.N.A., illegally, to match Spider-man. This brings in the Ultimates, who arrest Kraven, not before a fight. At the Triskelion prison, Norman Osborn reveals that he has a plan... a plan that will involve a team of 6...

Retrieved from "https://heykidscomics.fandom.com/wiki/Ultimate_Six_Vol_1_1?oldid=1461915"
Community content is available under CC-BY-SA unless otherwise noted.