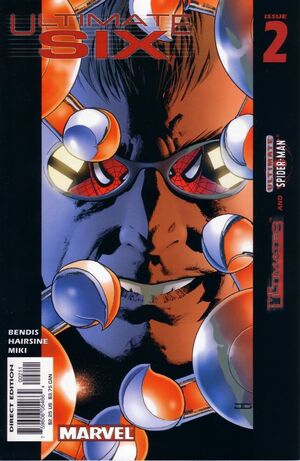 Norman Osborn snaps when he hears that he has nothing left outside prison; no home, money, reputation. Hank Pym grows and stops Osborn before anything bad happens. Otto Octavius asks the S.H.I.E.L.D. guards that he wants to share his intelligence. He goes to a lab, where scientists show him his arms. Otto explains that he may be a mutant, with the OZ explosion enhancing his power. He explains he has the power to control his arms mentally. He then uses the arms to impale the guards, and Hank Pym. The power shuts down in the prison, allowing the prisons to escape. Osborn and the others transform, thank Otto, and then leave. Osborn reveals that his sixth member is Peter Parker...

Retrieved from "https://heykidscomics.fandom.com/wiki/Ultimate_Six_Vol_1_2?oldid=1461917"
Community content is available under CC-BY-SA unless otherwise noted.