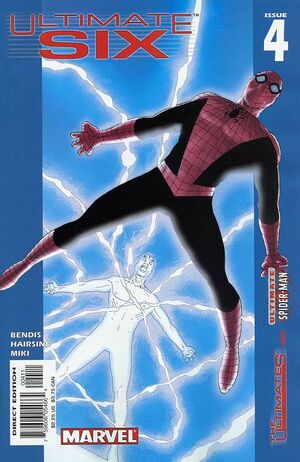 At the Hamptons, Norman Osborn has made his phone call to the White House. Now, Nick Fury is being yelled at by the President of the United States. Norman has told them what Fury has done: He has kept Osborn and the other 4 locked up illegally, without a trial. Now, if they don't give Norman his son back, throw Fury in jail, and give Osborn 100 million dollars, they are going to release the news live.

Norman is with his men; Octavius, Dillon, Kravinoff, and Marko. They are all in the plan to take down Fury.

The Ultimates are in the air. They crash into the building with the people who worked with Kraven in his show, and ask where Kraven is, but no one knows. Fury arrests everyone, and everything. Captain America looks at Fury, angry. Fury looks back, the same.

Otto Octavius has downloaded their security codes, and are about to commence their attack.

At the Triskelion, Peter calls his Aunt May.

Suddenly, an agent calls out that they are being hacked. Fury orders all systems to shut down, but the power cuts out before he could finish his sentence. It is all dark. Peter is alerted by his spider-sense. Then, Electro crashes in, electrocuting agents in the process. Sand bombards the room, and before Peter can do anything, sand in the shape of a hammer takes him to the ground. The ceiling implodes, as the Green Goblin crashes down. Norman calls Peter his boy, and Peter is electrocuted.

Retrieved from "https://heykidscomics.fandom.com/wiki/Ultimate_Six_Vol_1_4?oldid=1461921"
Community content is available under CC-BY-SA unless otherwise noted.