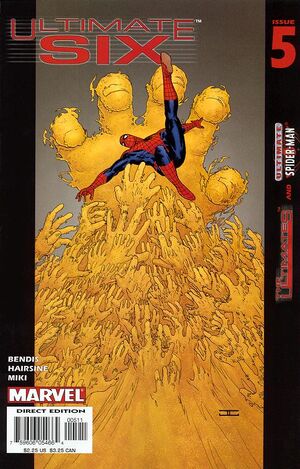 Peter, you are, simply said, my finest hour. You are my greatest creation. We created you, Otto and I. We created Spider-Man. In a way, really, Otto and I are your parents. You were like everyone else, just a boy, and your real parents gave birth to the boy. But now, because of us, you're so much more... You're absolutely perfect.

S.H.I.E.L.D. finds and takes May Parker to a secure location. At the Triskelion, the agents are picking up the mess that the 5 have created, and Nick Fury is just watching, in a deep rage. Luckily, Bruce Banner was asleep the whole time.

Peter Parker is waking up after being electrocuted and captured by the 5. Osborn uses blackmail on Peter, telling him that Peter doesn't help the 5, they will kill his Aunt May. Peter agrees.

Captain America finally tells Fury what his problem is: S.H.I.E.L.D. and others are creating these maniacs all because they are trying to recreate Captain America. Fury is about to reply Cap, when he finally realizes what the 6 are going to do.

The lights go out, and then the room is bombarded with Electricity. Outside, the soldiers are trying to take down whatever is attacking, but they are all electrocuted, and killed. Out of the fire, the 6 are seen walking towards the White House.

As they are walking, a S.H.I.E.L.D. Hellicarrier comes rocketing down from the air, along with the Ultimates.

Retrieved from "https://heykidscomics.fandom.com/wiki/Ultimate_Six_Vol_1_5?oldid=1461923"
Community content is available under CC-BY-SA unless otherwise noted.